The rumoured deal is now official: Google has acquired Songza, the music app that determines the best playlist for users based on their mood. Oh, and these playlists are curated by music experts such as DJs, Rolling Stone writers, etc. (via Re/code)

Not so long ago, the New York Post heard that the deal could be worth about $15 million, though Songza did not officially disclose the terms of the deal. However, there was speculation about other potential buyers as well, which could mean a higher price tag. 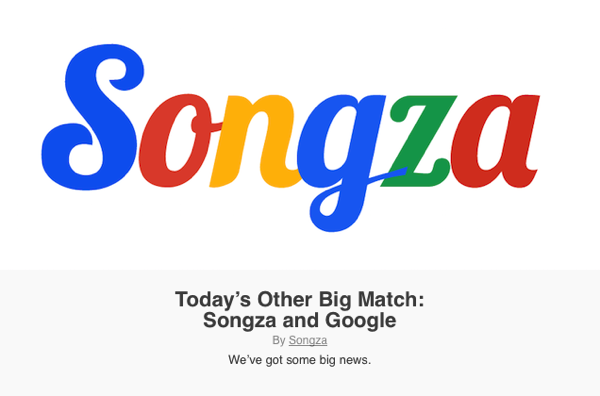 Unlike other startups acquired by Google, Songza will remain almost entirely intact. It won’t be shut down; instead, it will join the company in New York to enrich other products such as Google Play Music, YouTube, and more.

Songza launched in 2007 as a streaming service, but it went beyond that through its Concierge feature, which uses the date and time as well as activity to play the right music.

Since then, the creators have raised $6.7 million in funding, and their growth curve has been looking good: As of today, Songza has 5.5 million active users.

Exciting news today — we’re thrilled to welcome +Songza to Google. They’ve built a great service which uses contextual expert-curated playlists to give you the right music at the right time. We aren’t planning any immediate changes to Songza, so it will continue to work like usual for existing users. Over the coming months, we’ll explore ways to bring what you love about Songza to Google Play Music. We’ll also look for opportunities to bring their great work to the music experience on YouTube and other Google products.

You know why we love building Songza? Because you trust us to make every moment of your day better — and that’s a pretty huge honor. Today, we’re thrilled to announce that we’re becoming part of Google. We can’t think of a better company to join in our quest to provide the perfect soundtrack for everything you do. No immediate changes to Songza are planned, other than making it faster, smarter, and even more fun to use.

In the meantime, we’ll be walking on sunshine.

Apple will pay a total of $3 billion for Beats when its deal closes, and it approached the company for some of the same reasons. As it turns out, curated playlists are the next battlefield of the tech giants: Apple will be helped by its Beats acquisition, and Google through Songza’s talent, while Amazon has recently launched its own Prime Music service.