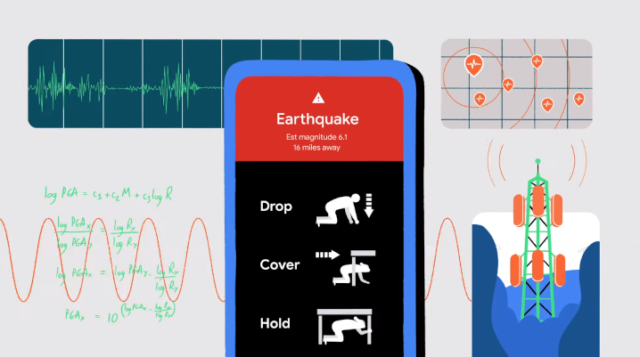 Android devices will soon be able to detect earthquakes as they’re happening, thanks to a partnership between Google, the U.S. Geological Survey’s (USGS) ShakeAlert, and academics at the University of California, Berkeley and California Institute of Technology (Caltech).

There are more than 2.5 billion Android devices worldwide and most have a built-in accelerometer that measures motion. These accelerometers, Google has found, are often sensitive enough to pick up earthquakes. The search giant is building a detection system that will have the ability to collect seismic activity data from a large number of Android devices in a given region and analyze that data to determine when an earthquake is occurring.

“All smartphones come with tiny accelerometers that can sense signals that indicate an earthquake might be happening. If the phone detects something that it thinks may be an earthquake, it sends a signal to our earthquake detection server, along with a coarse location of where the shaking occurred,” wrote Marc Stogaitis, the Principal Software Engineer at Google, in a blog post.

Google is looking to track two types of seismic activity in particular. These are the primary waves of an earthquake, which hit first, and the secondary waves that follow close behind and tend to cause more damage. The tremors they generate at the surface are usually felt first at the epicenter of the earthquake first before spreading to a broader area.

According to Google, Android devices at the epicenter could pick up seismic activity early on and send the data to its detection system. The system could then send mobile notifications to users who are farther away from the earthquake’s starting point to give them an early warning. Google believes that, in theory, this approach would make it possible to give users in the outer areas of an earthquake impact zone as many as 45 seconds to take cover.

Earthquake alerts are rolling out in California first, since there’s already a great seismometer-based system in place.” Stogaitis said the feature will roll out to more states and regions using the Android-based detection over the coming year.