Google has blocked users from being able to edit Maps in Ukraine. 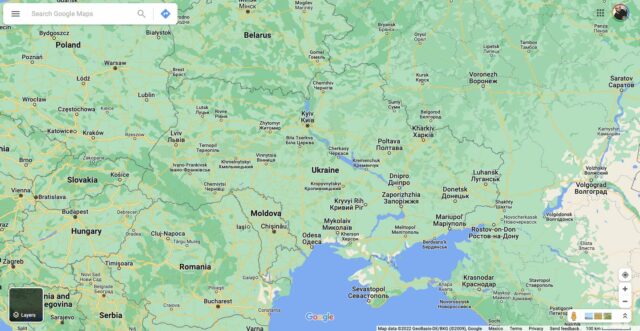 According to a report from Buzzfeed News, users across social media have accused Google Maps of hosting content that has allegedly been used to target airstrikes on Ukrainian cities like Kyiv and Kharkiv.

“The tags in Google Maps were created on Feb 28th, and people noticed that the tags match the places the missile strikes today,” Oleksandr Balatskyi told BuzzFeed News. Users noted that the user-generated tags began appearing yesterday with titles such as “ФЕРМЕРСЬКЕ ГОСПОДАРСТВО” — or Ukrainian for “farm” — and “СІЛЬСКЕ ГОСПОДАРСТВО,” Ukrainian for “agriculture.”

As part of an announcement promising to “support people in Ukraine through our products, defend against cybersecurity threats, surface high-quality, reliable information and ensure the safety and security of our colleagues and their families in the region,” Google noted that it will begin restricting some of Google Maps’ features in the region.

“And after consulting with multiple sources on the ground, including local authorities, we’ve temporarily disabled some live Google Maps features in Ukraine, including the traffic layer and information about how busy places are, to help protect the safety of local communities and their citizens,” writes Google’s president of global affairs Kent Walker. “We’ve also added information on refugee and migrant centers in neighboring countries.”

It’s also deleting all user-submitted places and contributions, such as photos, videos and business information in those countries made since February 24th. The tech giant came to the decision “out of an abundance of caution” after people claimed across social networks that the Russian military has been relying on pins created by users on Maps to coordinate air strikes on Ukraine.

“Out of an abundance of caution, we are removing user contributions like photos, videos, reviews and business information and all user-submitted places from Google Maps in Ukraine, Russia and Belarus since the invasion began, and are temporarily blocking new edits from being made,” a spokesperson explained.

Google yesterday published a blog post outlining further steps the company is taking to limit their operations in Russia and restrict the flow of Kremlin-backed propaganda across Europe as the war in Ukraine intensifies.