Google Pixel 4a 5G Spotted on Canada Certification Ahead of Launch

When Google announced the official launch of the Pixel 4a in Canada last month, it also revealed its plan to launch a 5G variant of Pixel 4a in the coming months, although no release date was specified. Today, however, Google Pixel 4a 5G’s spotting on Canada certification is hinting at an imminent launch. 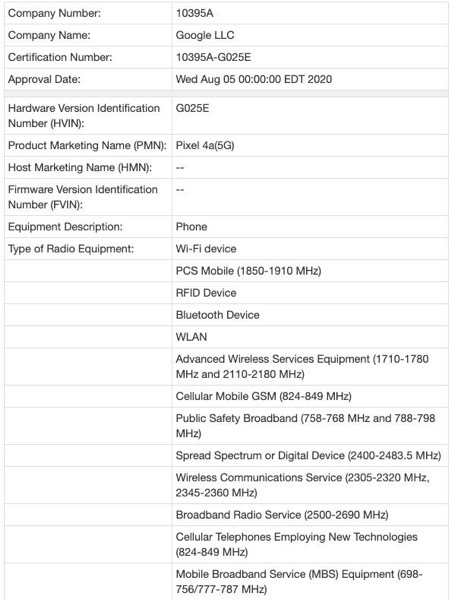 The folks over at MySmartPrice have identified a new Google device codenamed ‘G025E’ appearing on the Canada certification website to be the upcoming 5G variant of the Google Pixel 4a.

Based on recently published CAD-based 5K renders, the Google Pixel 4a 5G will feature a 6.1-inch or 6.2-inch 153.9 x 74.0 x 8.6mm display, with a single punch-hole cutout for the front camera on the top-left corner with minimal bezels and a plastic unibody. The processor on the Pixel 4a 5G is expected to be a Qualcomm Snapdragon 765G.

Based on earlier leaks, the Pixel 4a 5G will be unveiled sometime in October.