Good news, Google Stadia users: If you’re trying to search for your favorite games on the platform’s web store, you can do that now.

After more than 500 days, Google Stadia, the game streaming platform is finally getting a search bar, reads a new post in the Stadia Community Blog.

“First off, search bar on Stadia for Web is rolling out now and will reach all players this week,” the post reads. “It will make finding your favorite games much easier. In addition, an updated UI along with sorting for your library is making its way to players this week, which will help keep track of all your purchased, free and Pro games.”

Yes, the company that became a tech giant through its mastery of search results somehow didn’t include a search bar on its online games store.

Needless to say, this inspired some negative reactions from notable gaming personalities.

“It’s great that after almost 1.5 years hiring and laying off entire games studios and generally squandering their early launch advantage, the massive corporation entirely built around Search has integrated a Search [bar] into its service,” Vlambeer co-founder Rami Ismail said.

Insults to Stadia’s lack of basic functionality aside, there’s not a lot to say about the search bar. Where there wasn’t a search bar in the interface, now there is. You can use it to find games in Stadia’s growing library, which is nice. 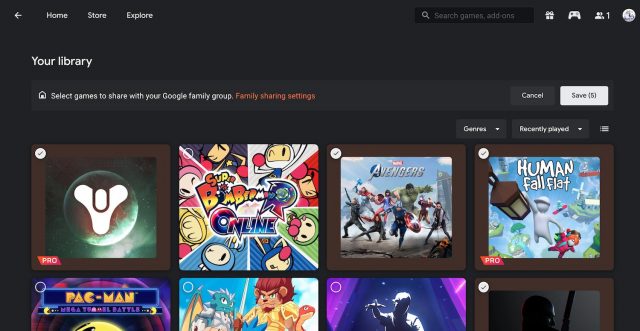 The Stadia team also showed off some new features it’s working on, like an activity feed and accessibility through an Android browser.

Despite Google Stadia shutting down its internal studios earlier this year, the streaming platform is continuing to push updates and has even promised that Stadia would be getting more than 100 games in 2021.