Google’s much-rumoured foldable Pixel phone may have just hit the Geekbench database, as discovered by MySmartPrice.

Identified only as “Google Felix” on Geekbench, the device features an eight-core Tensor G2 SoC, the same chip that powers the Pixel 7 series that launched earlier this year, 12GB of RAM, and Android 13.

The alleged “Pixel Fold” scored 1,047 points in Geekbench’s single-core test, and 3,257 in the multi-core benchmark. 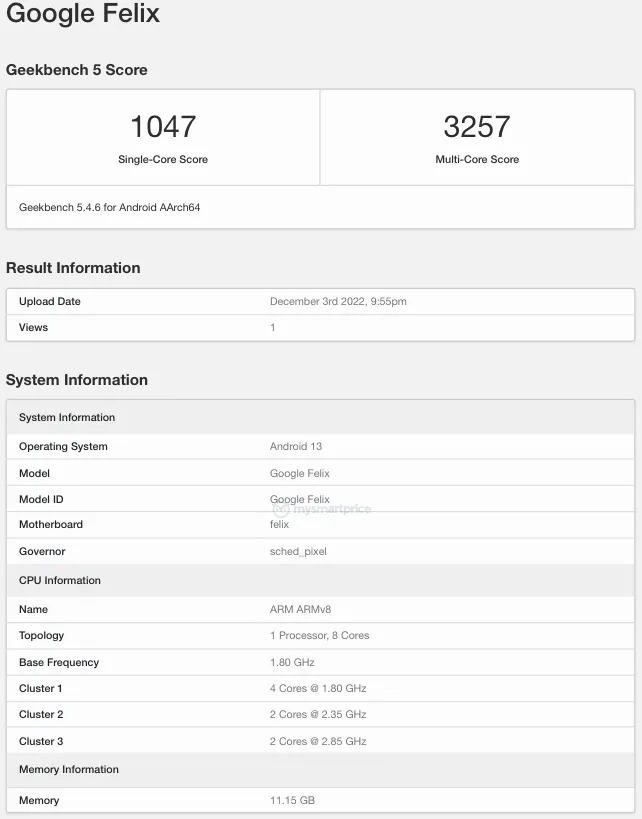 What Google’s Pixel phones lack in raw computing power, though, they make up for in AI and Pixel-exclusive features, in addition to camera prowess.

Google’s first foldable was originally expected to launch alongside the Pixel 6 series in 2021, but it ended up being delayed. There were whispers of the Pixel 7 lineup including a foldable, but those didn’t pan out either. A May report indicated that the Pixel Fold had been kicked further down the road to spring 2023.

Latest reports suggest that Google will unveil its first foldable phone in May 2023, around the same time as Google I/O. We got our first look at what very well could be the Google Pixel Fold in fairly convincing renders that surfaced last month.

Going by the renders, the Pixel Fold will have a premium glass-and-metal chassis with the same design language as the Pixel 7 and the visor-like camera module that Google has adopted for the past couple of generations.

For displays, the Pixel Fold will have an 8-inch foldable display on the inside (with admittedly thick bezels, judging by the recent renders), and a 6.19-inch screen on the outside.

The Pixel Fold will reportedly launch at a starting price of $1,799 USD — the same as Samsung’s Galaxy Z Fold 4. While Samsung has been iterating in the foldable space for four generations now, Google is completely green and hopes to bring its signature Pixel experience to a foldable for the first time.

What do you think about the Google Pixel Fold? Let us know in the comments below.