Chinese smartphone manufacturers gained momentum in the second calendar quarter, according to data from the International Data Corporation (IDC) Worldwide Quarterly Mobile Phone Tracker. Apple’s global smartphone market share dropped to 11.9% for Q2 2014, down from the 13% recorded during the same period a year ago, as the smartphone market grew 23.1% year-over-year. 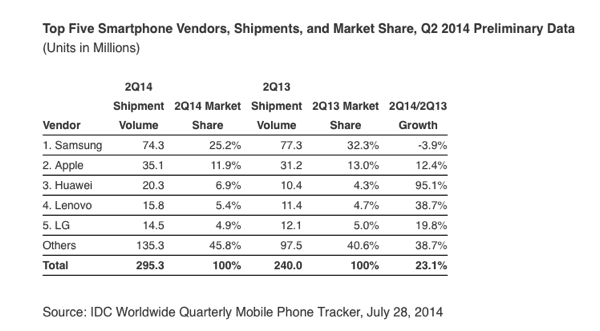 “As the death of the feature phone approaches more rapidly than before, it is the Chinese vendors that are ready to usher emerging market consumers into smartphones. The offer of smartphones at a much better value than the top global players but with a stronger build quality and larger scale than local competitors gives these vendors a precarious competitive advantage,” said Melissa Chau, Senior Research Manager with IDC’s Worldwide Quarterly Mobile Phone Tracker.

Impressive growth was also posted by Lenovo, 38.7% y-o-y, as the smartphone manufacturer shipped 15.8 million units this past quarter compared to the 11.4 million shipped during the same period a year ago.