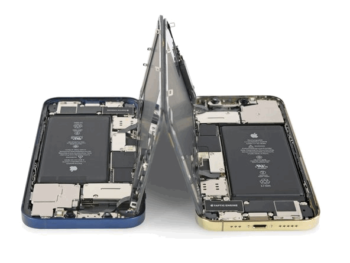 With the iPhone 12 and 12 Pro officially available, iFixit was able to get their hands on Apple’s newest devices — not to use them, but to tear them down and take a look at what’s inside. Following a live teardown of the two technological marvels, iFixit‘s final teardown overview is now up on their website.

The teardown experts saw changes from the very beginning, with the chassis for both devices now opening from the right edge. At first glance, the innards of the iPhone 12 and the 12 Pro appear to be remarkably identical, with the exception of an extra telephoto lens on the Pro.

The iFixit team found the screens and batteries of both devices to be functionally interchangeable. Perhaps the biggest change from older iPhones is the fact that the logic board has a new position inside the body, most likely to account for its much larger size due to the inclusion of 5G tech.

Overall, iFixit gave the iPhone 12 and iPhone 12 Pro a “Repairability Score” of 6 out of 10, noting that the battery and screen remain easily replaceable, and most other important components are designed to be modular and easy to access/replace.

Fair warning to anyone tearing down the iPhone 12 or 12 Pro, however — Apple has used a lot of screws, ranging from pentalobe and tri-point to standoff.