Instagram is expanding its live streaming function, which will now allow up to four people to go live on a split screen. 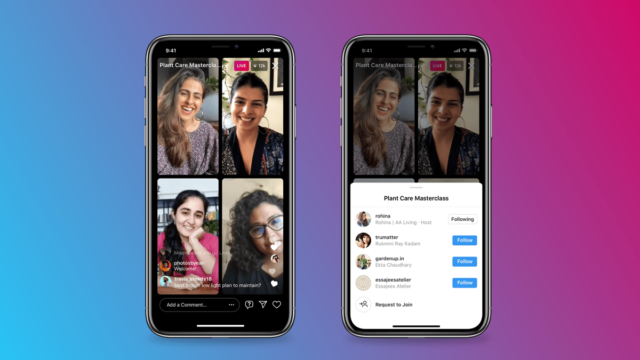 Instagram today launched Live Rooms, a new feature that lets you go live with up to three other people, reads a press release. Instagram users could previously only go live with one other person, but can now “double-up” on their broadcasts.

Live Rooms also gives creators more ways to monetize their work. Viewers can show appreciation for their hosts by buying badges during the streams, and use other interactive features such as Shopping and Live Fundraisers.

Live video has been used during the coronavirus pandemic to stream workout routines, concerts and other gatherings, so it’s no surprise that social networks are doubling down on this product. Taking on video conferencing apps such as Zoom, Facebook Messenger also released a product called Rooms last year.

To start a Live Room, users swipe left and choose the Live camera option. After adding a title, they tap the Rooms icon to add guests to the live broadcast. Instagram users can request to go live with another person. The user hosting the online space can also search for a guest to add to their live video.

The platform assures that users blocked by any of the broadcasters in a Live won’t be able to see it and that all features available to Live hosts, such as the ability to report and block comments, will also be available to Live Rooms hosts.