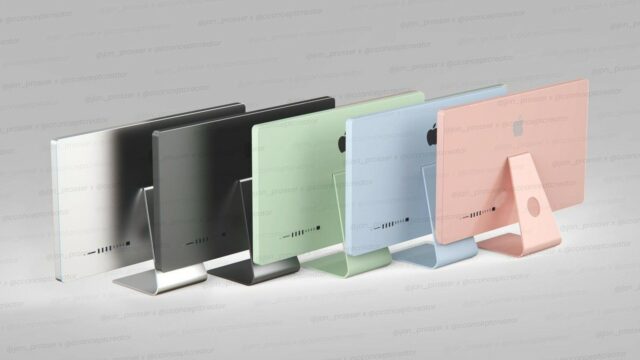 A new leak from serial Apple rumourmonger Jon Prosser suggests that the new iMac will be available in the same range of colours as the recent iPad Air. His latest video asserts that the iMac will come in five colors: Silver, space gray, rose gold, green, and sky blue. Those tints are said to be the same shades as those currently found on the iPad Air.

He also states that while he can say with relative certainty that the color options are coming, the port layout on the back of the computer is not certain, as the images he was shown of the new devices were only of a portion of their backs and did not show any ports. The ones depicted in the watermark-laden mockups are just copied from the latest generation iMac.

Other than the design, there’s nothing new in the report. There’s no new information on whether this is going to be an Intel product or an Apple Silicon PC, or about advancements in Apple’s custom processors to support a more pro-sumer market that are lacking in the current M1.

It’s been a long time since Apple sold colourful iMacs: the Blue Dalmatian and Flower Power iMacs came out twenty years ago on February 22, 2001.

In the same video, Prosser also shared some information regarding the rumored half-size Mac Pro that is allegedly in the works. Unlike the new iMac colors, this leak has been backed up elsewhere, with reliable reporter Mark Gurman previously claiming Apple is going to launch a shrunk-down Mac Pro with Apple Silicon chips inside. Prosser confirms that, saying it looks like “three to four Mac Minis stacked on top of each other.”

Apple's VP of Platform Architecture and Hardware Technologies Tim Millet and VP of Worldwide Product Marketing Bob Borchers recently sat down for an interview with TechCrunch where the pair talked about the tech giant's homemade M-series chips, gaming on Macs with Apple silicon, and more. Millet, who has been at Apple for almost 17 years and...
Nehal Malik
55 mins ago