Instagram is rolling out another set of anti-bullying features, including the ability to limit comments and filter abusive DM requests. 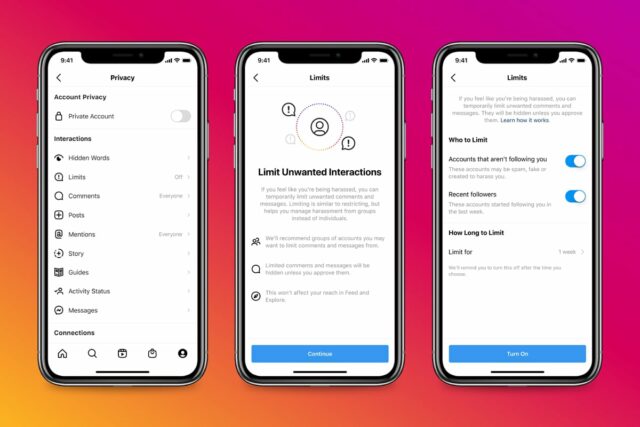 According to a new blog post, Instagram is rolling out a new safety feature called Limits, which allows users to filter comments and DMs “during spikes of increased attention.”

“We have a responsibility to make sure everyone feels safe when they come to Instagram,” company head Adam Mosseri wrote in the announcement. “We also want to protect people from having to experience […] abuse in the first place, which is why we’re constantly listening to feedback from experts and our community, and developing new features to give people more control over their experience on Instagram, and help protect them from abuse.”

Limits can be used to automatically hide message requests and comments from accounts who aren’t followers, or who just followed a user recently. Interactions from these accounts remain hidden unless the user approves them. The feature is being made available worldwide from today on.

Announcing the move, Mosseri said: “We developed this feature because we heard that creators and public figures sometimes experience sudden spikes of comments and DM requests from people they don’t know.”

Mosseri pointed to the racist abuse directed towards football players after the Euro 2020 final as an example of the kind of situation Limits is designed to address.

“In many cases this is an outpouring of support — like if they go viral after winning an Olympic medal,” Mosseri noted. “But sometimes it can also mean an influx of unwanted comments or messages.”

“Creators also tell us they don’t want to switch off comments and messages completely; they still want to hear from their community and build those relationships,” he continued. “Limits allows you to hear from your longstanding followers, while limiting contact from people who might only be coming to your account to target you.”

Mosseri also said that Instagram is “exploring” ways for the app to automatically detect big spikes of interaction on public accounts in order to suggest to users that they use Limits.

Instagram is also rolling out Hidden Words, which automatically filters DMs with offensive words, phrases, and emojis into a separate folder you don’t have to open if you don’t want to. It also filters spam and low-quality DMs. This will be available to all users globally by the end of the month.

Samsung's annual Unpacked event is being held tomorrow, February 1st. Unveiling the latest flagship devices, including the Galaxy S23 series. It's likely that there will also be other surprises to be had. Here's how you can watch the digital live-streamed event and not miss a moment. Each year, Samsung hosts its Unpacked event and reveals...
Steve Vegvari
34 mins ago