Many of us own multiple Apple devices, and if you are someone who often upgrades his or her iPhone, iPad, or iPod touch then iOS 11 can be of great help. iOS 11 brings “Automatic Setup” to the operating system, which makes it possible for iOS users to import personal settings, preferences and iCloud Keychain passwords quickly and securely to their new Apple device. 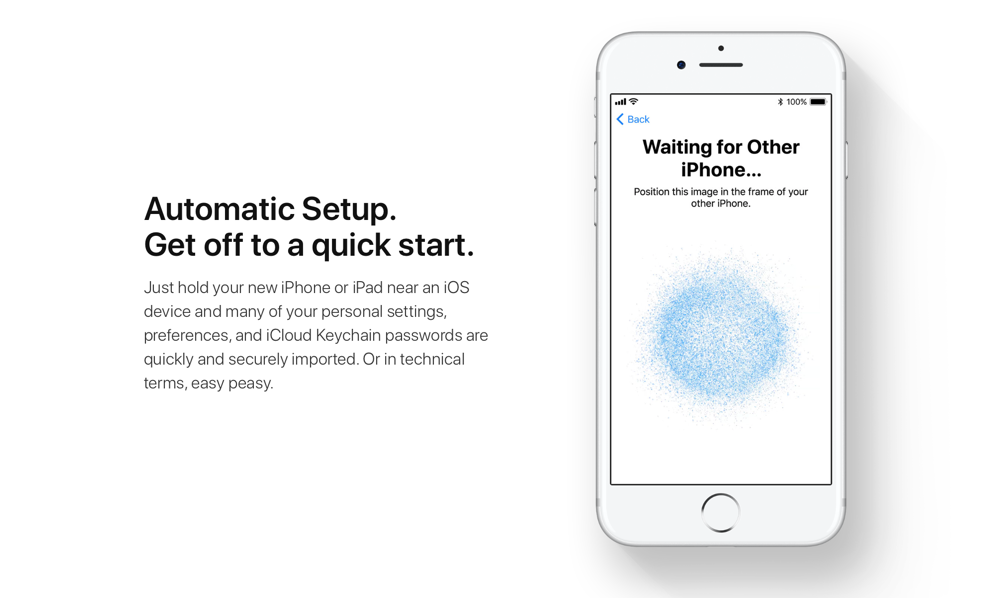 According to a report from MacRumors, the new feature works like a similar method currently available on brand new Apple TV 4. But of course, the method which is implemented in iOS 11 is far more polished and takes a lot of cues from the AirPods and the Apple Watch style of scanning an on-screen code.

To use Automatic Setup in iOS 11, you need both devices to be running iOS 11, which means that you’ll have to wait until iOS 11 devices start shipping in the fall (or install the beta on two and then reset one of them). You start off following along the usual steps for a new device — you choose your language and then your region — but right after that the new assistant kicks in.

The new device will then tell you to “Bring your existing iOS device close” to the new iPhone or iPad. When you do so, a little panel pops up on the old device, giving you some instructions on “pairing” the devices. To complete the pairing, you have to aim the camera of your existing device at the whirling cloud patterns on the screen of the new device.

And, voila, that’s it! The WiFi information, Apple ID settings, and other information like iCloud Keychain passwords, are then automatically beamed across to the new device in order to automate some of the set-up processes. Overall, it seems to be quite an easy process.

Check out the video of the process in action below: