Today Apple has updated its developer support page, which shows that iOS 7 adoption rates have reached 87 percent based on App Store usage. iOS 7 adoption is up 5 percent in about two months and will probably continued to increase over the next several weeks and months. 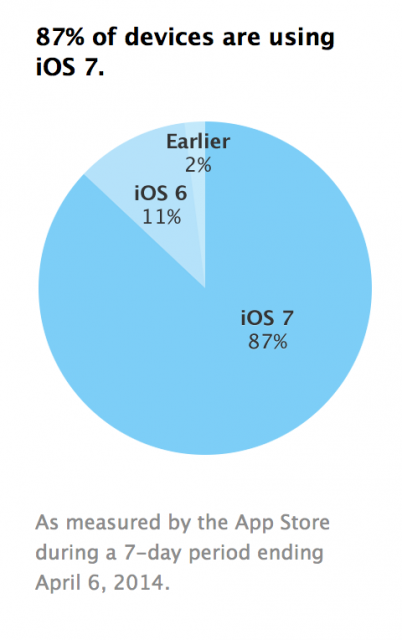 iOS 6 usage has dropped from 15 percent to 11 percent based on App Store usage ending on April 6, 2014. Less than two percent of all devices are running an earlier version of iOS, and those are probably devices that don’t support the iOS 7 update.

To put this into perspective, Android 4.4 KitKat is currently running on only 5.3 percent of all devices.

With the release of iOS 7.1, which fixed a lot of bugs that we saw following the introduction of iOS 7, more users seem to be updating to Apple’s latest mobile operating system.

iOS 8 is expected to be previewed at Apple’s WorldWide Developers Conference in June, while the “iWatch” and new models of the iPhone are expected to debut in the second half of the year.

Quora has just opened public access to its AI chatbot ‘Poe,’ which lets people ask questions, get instant answers, and have back-and-forth conversations. Poe allows users to ask questions from a range of AI chatbots, including those from ChatGPT maker OpenAI, as well as other companies like Anthropic. Quora’s chatbot is currently available on iOS, but...
Usman Qureshi
7 hours ago