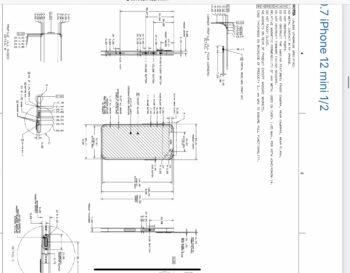 The iPhone 12 mini bezel is only 3.27mm, which is currently the narrowest chin mobile phone, and is narrower than the 3.47mm of the iPhone 12/Pro/Max. pic.twitter.com/xLODNYbQLl

Like its predecessors, the iPhone 12 mini strives to provide a bezel-less viewing experience to users, and in doing so comes with a notch at the top of the display. Ignore the notch for a second, and you will see that the iPhone 12 mini has an unprecedented screen-to-body ratio, with the side bezels and chin (the bottom bezel) measuring just 3.27mm.

The iPhone 12 Mini has the narrowest chin of any device available on the market right now, narrowly beating out its siblings, all of which come with 3.47mm thick chins. Apple is able to get remarkably sleek chins on its phones because they are fitted with OLED displays that fold inwards near the bottom.

The only threat to the iPhone 12 mini and its exceptionally tiny bezels in sight is Samsung’s upcoming flagship Galaxy phone, which is rumoured to feature an even smaller chin and side bezels.

The iPhone 12 mini and iPhone 12 Pro Max are launched pre-orders on Apple.ca on Friday.