Update 1: The beta is now back up for download. MacRumors notes ‘iPhone 4S’ was first referenced in iTunes Beta 6.1 back on August 29th, 2011.

Apple released a new version of iTunes beta yesterday, and today the ‘iPhone 4S’, also known as ‘N94’ has been discovered within this beta, as reported by 9to5Mac. This new beta has since been pulled from the Apple Developer Center (coincidence?).

The specific mention of iPhone 4S all but confirms there will be a version similar in design to the iPhone 4. This new iPhone 4S mention referred to black and white variants of CDMA and GSM models, possibly a hint at dual-mode capability.

Earlier, 9to5Mac also noted a screenshot from Radio Shack that showed an ‘iPhone 5’ show up in Sprint’s product directory. We saw an earlier label of an ‘iPhone 5’ appear online as posted by @iH8sn0w: 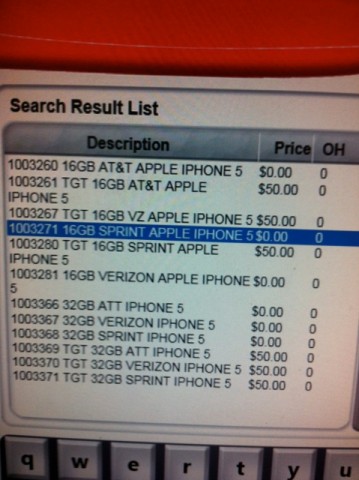 Apple is set to announce a new iPhone on Tuesday at their ‘Let’s Talk iPhone’ event, and the latest speculation is that it will include the dual-core A5 chip currently in the iPad 2, an 8MP camera, 1GB of RAM, and a new revolutionary voice navigation called Assistant. What do you think is coming Tuesday? iPhone 5 or iPhone 4S, or both?