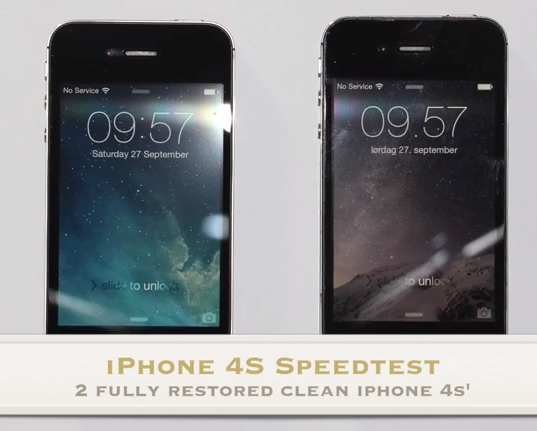 Shortly after the release of iOS 8, tests shown by Ars Technica noted iPhone 4s users may experience a negative performance impact with the latest version of iOS on their ‘aging’ smartphone.

A new video released by YouTube user kabriolett (via 9to5Mac) today shows a speed test between newly released iOS 8.0.2 versus iOS 7.1.2 on the iPhone 4s, setup as a brand new phone.

Here’s what the uploader has to say:

This test was made on 2 virgin iPhone 4S. The conclusion has to be that 7.1.2 is slightly faster. It was mostly visible on the Appstore app. Other Apps are only milliseconds slower, same applies to Apps not shown in this test. I have to stress that the test has been made on freshly restored phones, that are not weighed down by tons of text messages, full camera roll etc. September 27th 2014

As you can see from the test above, the performance impact is there, but not a huge one, aside from the App Store app loading slowly on iOS 8.0.2. Of course, these freshly restored phones aren’t bogged down by app installs, pictures and more, so a truly real-world test might show a bigger impact on performance.

Apple stopped signing iOS 7.1.2 yesterday, so that means if you upgraded to iOS 8, you cannot downgrade any longer.

Did you install iOS 8 on your iPhone 4s? How is it so far?