A new video posted by Taiwan Apple Daily reveals some more information about the forthcoming lower-cost iPhone dubbed the iPhone 5C (Via iPhone Hacks). The rumour mill has already spilled some measurements of the awaited handset, but this is the first time the blue rear shell has been subjected to a stress test on video. 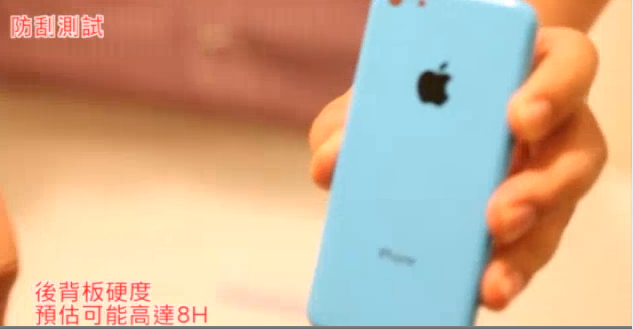 As you may have already guessed, the iPhone 5C will indeed be a bit taller and thicker than the iPhone 5, and the site has measured the rear shell to give the exact number based on that part.

In line with earlier rumours, the site claims the iPhone 5C will sport the same internals as the iPhone 5. What is interesting, though, is that the case is highly scratch resistant: they have performed a stress test by putting the rear case into a plastic bag with some keys and coins, and shaking it. Their sources also mention that the rear casing has a surface hardness of 8 H, which is apparently three times stronger than regular PET film.

Also, the report — citing their own sources — corroborates earlier rumours about the iPhone 5S and dual LED flash for enhanced night-shooting mode.

If the rumour mill can be believed, both highly anticipated iPhone models will be launched at a media event on September 10.

This video doesn’t have an embed option, you can visit the Taiwanese site to watch it.

Back in October, Apple confirmed its head of hardware design, Evans Hankey, was departing from the company after just three years of replacing the famed design chief Jony Ive. Now, Bloomberg’s Mark Gurman reports Apple won’t be replacing the coveted design chief role, but instead having its entire team report to the company’s chief operating […]
Gary Ng
44 mins ago