Earlier this evening the Wall Street Journal seemingly confirmed Apple’s next flagship iPhone 5S would come equipped with a fingerprint sensor built into the Home button, as seen in a purportedly leaked retail box we published a few days ago.

Now, more possible evidence has surfaced as NowhereElse.fr has published an image of what appears to be the iPhone 5S user guide. The interesting part of this user guide is the description of ‘Home button/Touch ID sensor’ at the bottom, referring to the fingerprint sensor in the iPhone 5S Home button; also note the button doesn’t seem to have the square icon in its centre: 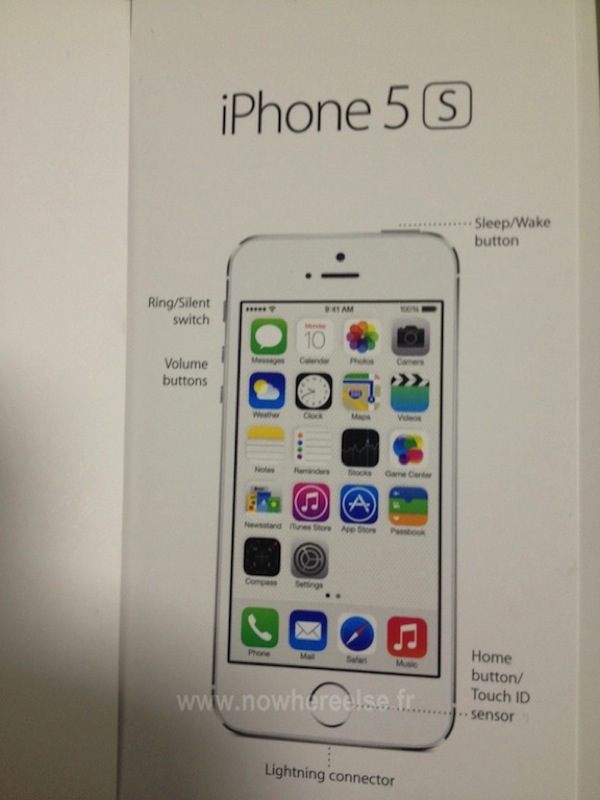 The site says one of their ‘reliable’ sources sent in the image, thus adding further credence to the photo. Also, the same source notes the iPhone 5S will have its model number as A1533 and the darker variation of the model will be known as ‘Space Gray’.

Just over a week ago, numerous hands-on videos surfaced of a fourth iPhone 5S colour labeled as ‘graphite’ at the time, to go along with the ‘confirmed’ gold/champagne option. What do you think about this allegedly leaked image? Does the name ‘Touch ID sensor’ sound like something Apple would debut?

With less than 11 hours to go until Apple announces its new iPhones, stay tuned for more possible last minute leaks.