iPhone 6 image leaks have been more frequent lately: the latest picture, shared by French site Nowhereelse (Google translate), claims to show the batteries for Apple’s next-generation iPhone in a production tray. While the image has all the necessary hallmarks of a genuine leak, its authenticity cannot be confirmed. The French site has a good track record in spotting and reporting information of unreleased Apple devices. 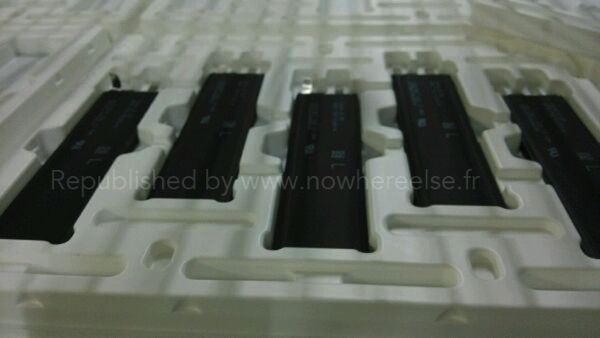 It is interesting to note that the French report claims that Apple has changed the positioning of the battery, as it contains a new, mysterious metallic element that is missing from the current models.

As you have probably noticed, rumours about the iPhone 6 have been very persistent lately, and the alleged images of the iPhone 6 manufacturing mold are in line with earlier claims of a bigger-screen iPhone. What may be interesting to note here is that the iPhone 5s battery was leaked only in June last year, after spotting the iPhone 5s PCB in the wild earlier that month.