Earlier this month, Google announced their new Pixel and Pixel XL smartphones, a new line of devices where the company has taken over full control of hardware (built by HTC) and software (running pure Android 7.1). 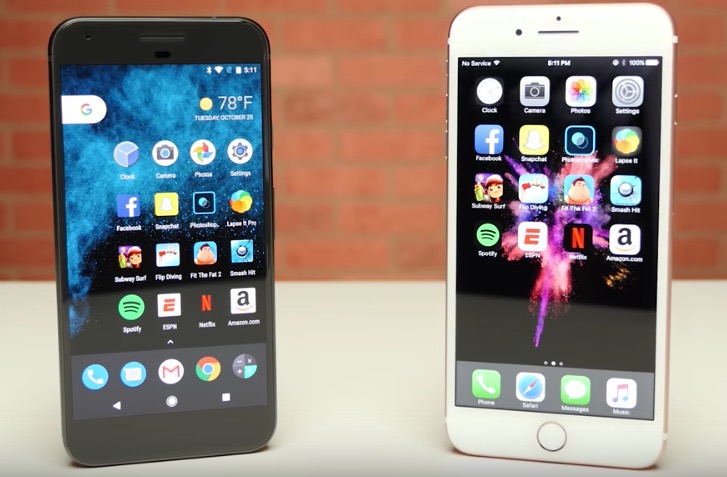 These new 5-inch and 5.5-inch smartphones are Google’s attempt to take on Apple’s iPhone, priced the same and also similar in design.

Just how does the larger Google Pixel XL fare in an unscientific speed test versus Apple’s iPhone 7 Plus? YouTube channel PhoneBuff has released yet another video of his “real-life” speed tests, which puts the launch speed and multitasking of each device to the test.

If you haven’t guessed it already, the iPhone 7 Plus knocks the Pixel XL out of the park. iOS and its optimization when it comes to memory management and multitasking is something Android has not caught up to yet.

Back in August, PhoneBuff put the iPhone 6s versus Samsung’s latest Galaxy Note 7 in a speed test. Apple’s year old smartphone with 2GB of RAM and its A9 processor blew the Note 7 out of the water.

What do you think of this speed test? The iPhone 7 Plus and its A10 Fusion will most likely also beat next year’s crop of Android smartphones.

The display technology experts over at DisplayMate have crowned the iPhone 14 Pro Max's screen the best to ever grace a smartphone, giving it their highest-ever A+ rating and "Best Smartphone Display Award." DisplayMate is one of the world's leading authorities on display technology. The corporation's reviews and reports are based on comprehensive, objective laboratory tests...
Nehal Malik
4 mins ago