Android accounted for 70% of the global smartphone market in the 12 weeks up to August 31, as measured by Kantar Worldpanel ComTech (via TechCrunch). Yet, the Google mobile OS share in the key markets measured – the US, the UK, and Australia — the seems to point downwards, which has given Apple and other market players an opportunity to gain market share.

“After years of increasing market share, Android has now reached a point where significant growth in developed markets is becoming harder to find. Android’s growth has been spearheaded by Samsung, but the manufacturer is now seeing its share of sales across the major European economies dip year on year as a sustained comeback from Sony, Nokia and LG begins to broaden the competitive landscape,” said Dominic Sunnebo, strategic insight director at Kantar Worldpanel ComTech.

Helped by the launch of the two new iPhone models, Apple was able to account for nearly 40% (39.3%) of all sales, while Samsung gained 36.7% in the US. The picture differs from country to country, but looking at the full image we can see that Apple is 11% behind Samsung on a global scale. This also means that the South Korean manufacturer has managed to widen the gap between the two companies.

Apple and Android have recorded almost identical shares of sales in Japan – 48.6% and 47.4% respectively. However, news that the new iPhone range will be available on Japan’s largest carrier, NTT DoCoMo, for the first time, makes it likely that Apple will pull ahead of Android in this key market.

Apple’s nearly 40% US smartphone market share, recorded during the 12 week period ending August 31, shows that Apple has managed to grow its market share by a further 6%, but at the same time it has dropped 3% compared to last year. 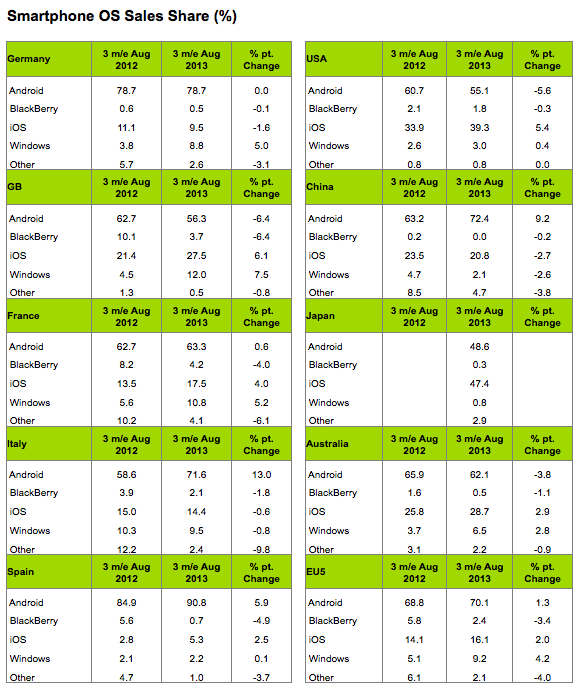