If You Miss the iPod Click Wheel, This App is For You 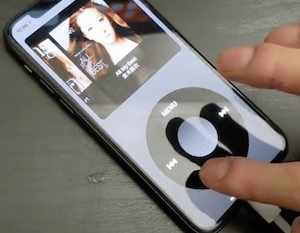 Elvin Hu, a design student at Cooper Union college in New York City, is developing an app that turns the iPhone into an iPod Classic with its iconic click wheel (via The Verge).

Hu shared an early look at the app on Twitter yesterday, showing how the app turns your iPhone into a fullscreen iPod Classic with a click wheel, complete with haptic feedback and click sounds just like the original iPod. Even Tony Fadell, the “Father of the iPod,” called it a “nice throwback” on Twitter.

Turned my iPhone into an iPod Classic with Click Wheel and Cover Flow with #SwiftUI pic.twitter.com/zVk5YJj0rh


Hu, who has been working on the project since October, says he built the app because he was working on a paper about the development of the iPod at school.

“I’ve always been a fan of Apple products since I was a kid,” revealed Hu in an email to The Verge. “Before my family could afford one, I would draw the UI layout of iPhone on lids of Ferrero Rocher boxes.

“I’ve been working on this project since October and whether I can release it or not does depend on whether Apple approve it,” admitted Hu. “I believe they have legitimate reasons not to (patents and other reasons).”

The app also includes the classic Cover Flow feature for scrolling through album and song artwork to select tracks. Hu says that if Apple blocks the app’s release in the App Store, he will release it as an open-source project.

Making an iOS music app that looks like Cover Flow in #SwiftUI… pic.twitter.com/29Nfil70I3