YouTube channel “Will It Work?” attempted to connect a 1977 Atari CX10 Joystick to an iPhone. 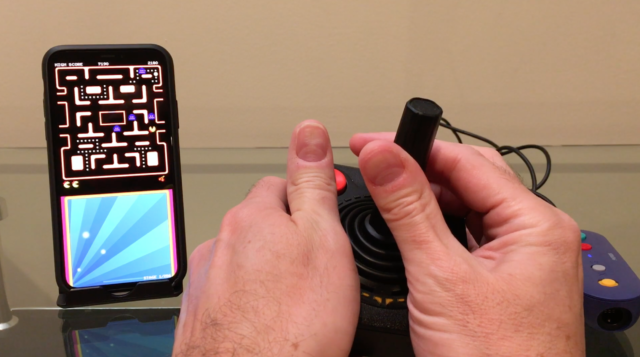 As seen in the below video, the YouTuber used a raphnet adapter, which are used for connecting retro console controllers to USB. The inter-console adapter used featured the DB9 connector on one end, converting the signal into a Wii classic controller input on the other end.

By using the converter cable connected to a GBros adapter, which allows users to connect GameCube and Wii Classic controllers to the Nintendo Switch, Macs, Windows, and iPhones, the YouTuber was able to control Ms. PacMan on the iPhone with the classic Atari controller.

He was also able to control Atari games, like Pitfall, Adventure, Asteroids, Hero, Superman, and E.T., all streamed directly through the browser.

So if you’ve got any old Atari controllers laying around and feel like a little gaming nostalgia, just break out your iPhone.

After iOS 16.1 beta users discovered Adaptive Transparency enabled for the original AirPods Pro and AirPods Max, we’re now finding out this is actually a “bug”. That’s according to what Bloomberg’s Mark Gurman shared on Monday morning, citing the MacRumors report. “I’m told this is a bug,” said Gurman in his retweet. He later clarified the […]
Gary Ng
1 min ago

Any shred of mystery Google was saving for its Pixel 7 series launch event on Thursday, October 6, likely dissipated when a detailed and legit-looking spec sheet for the two phones leaked online over the weekend (via 9to5Google). Apparently, a mobile carrier in Taiwan prematurely shared the spec sheet for Google's Pixel 7 and Pixel...
Nehal Malik
57 mins ago