According to an Apple patent application published today by the United States Patent and Trademark Office (USPTO), the company is working on a conductive yarn for iPhone-connected clothing that could be used keep tabs on your health and transmit that information to the wearer’s Apple devices, AppleInsider is reporting. 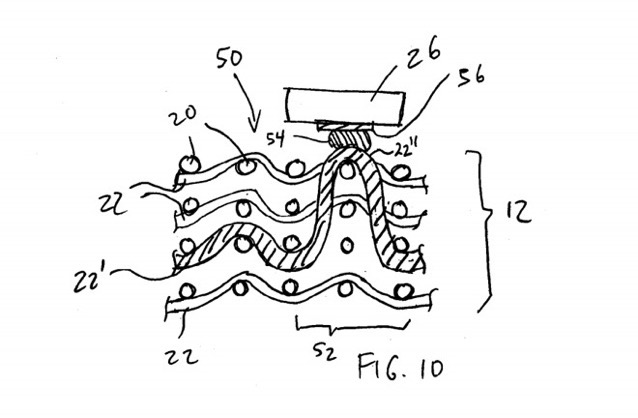 Apple’s filing titled “Fabric with Embedded Electrical Components” details how fabric-based items, such as the gloves that work with touchscreens, could be created with the fabric itself being the connectivity method.

The end result is for the creation of a fabric that acts like any other, but with the “wiring” incorporated to a level where it isn’t detectable.

These exposed elements can be used with an interposer that in turn is used with other traditional electronic components, including sensors, contacts, and output devices. Since the interposer could be a flexible printed circuit substrate and could have “serpentine arms” to help maintain connectivity with other components, this would be a more appropriate mounting point for other hardware.

As with any other Apple patent, however, there is no guarantee the company will be incorporating the concept into any of its future products. Earlier this week, Apple CEO Tim Cook said he wanted the company’s greatest contribution to mankind to be in health.