Following Kantar Worldpanel Comtech’s three-month smartphone sales report, it was the time for Consumer Intelligence Research Partners to look into the latest consumer trends in smartphone brand choice in the US. 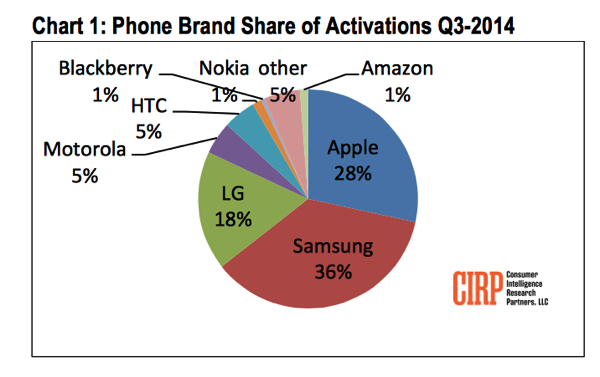 Analyzing the July–September period, CIRP has found that Apple maintained a strong second position in the market, with iPhones accounting for 28% of all smartphone activations. Samsung, on the other hand, managed to grab the most activations, with 36% of market share, at least according to CIRP.

“Samsung maintained its 36% share of US phone activations in the third quarter, while Apple dropped from its market leading 39% in the second quarter to 28% this quarter,” said Josh Lowitz, Partner and Co-Founder of CIRP. “Apple customers waited for the new iPhone 6 and 6 Plus models that Apple finally released in the final two weeks of the quarter. These shares are relatively similar to the same quarter a year ago, when Samsung had 38% compared to 34% for Apple.”

It is noteworthy, though, that Kantar’s findings are slightly different than CIRP’s: looking at the US market, Kantar found that Apple has 33% market share, which still contrasts an earlier comScore report stating the iPhone accounts for 41.9% of all smartphone sales (that was in May, though).

Looking forward, the market research company is confident that Apple will regain the leading position in the country during the holiday quarter, given the strong demand for the iPhone 6 and iPhone 6 Plus.

The CIRP survey was conducted between October 1-13 2014, and involved 500 US customers who purchased a smartphone in the country during the past calendar quarter.

Following the acquisition of animation production company Dynamo Pictures, Nintendo has launched a brand new website for its 'Nintendo Pictures' branch. At the time of the acquisition, it was known that Nintendo had plans to rename the Japanese company. Nintendo also previously announced its intentions to utilize the company's specialties to focus on  "producing visual...
Steve Vegvari
16 mins ago