Apple iPhone sales reached an all-time high in China, according to the latest report issued by Kantar WorldPanel ComTech. iOS accounted for 27.6% of the Chinese smartphone market, sales data for the three months ending in February revealed.

The iPhone 6 remained the best-selling device of all, retaining 10.2% of sales (up from the 9.5% recorded in the previous period ending in January), while the 5.5-inch iPhone 6 Plus grabbed third place, right after the Xiaomi RedMI Note.

“There has been a strong appetite for Apple’s products in urban China seen since the launch of the iPhone 6 and 6 Plus and this has continued into Chinese New Year. China Mobile’s subscribers accounted for 59% of the 27.6% volume share recorded by iOS in the latest period”, reported Carolina Milanesi, chief of research at Kantar Worldpanel ComTech. “Across key global markets Apple’s momentum generally continued from last month, with market share gains in all markets except the US and Japan.”

Due to the popularity of the latest-generation handsets — and Apple’s move to increase screen size — the company was able to grab the top spot of the smartphone market in China, outpacing Xiaomi.

iOS continued its upward trend in Europe as well: in Great Britain, the iPhone 6 remained the most popular device, followed by the Samsung Galaxy S5.

In the US, Apple lost 0.5% of market share compared to this time in 2014 ( 39.3% vs. 38.8%), but the iPhone 6 was the most sought-after device because of its screen size (according to 45% of surveyed customers) and LTE capability as well as the reliability and durability of the device, Carolina Milanese emphasized. 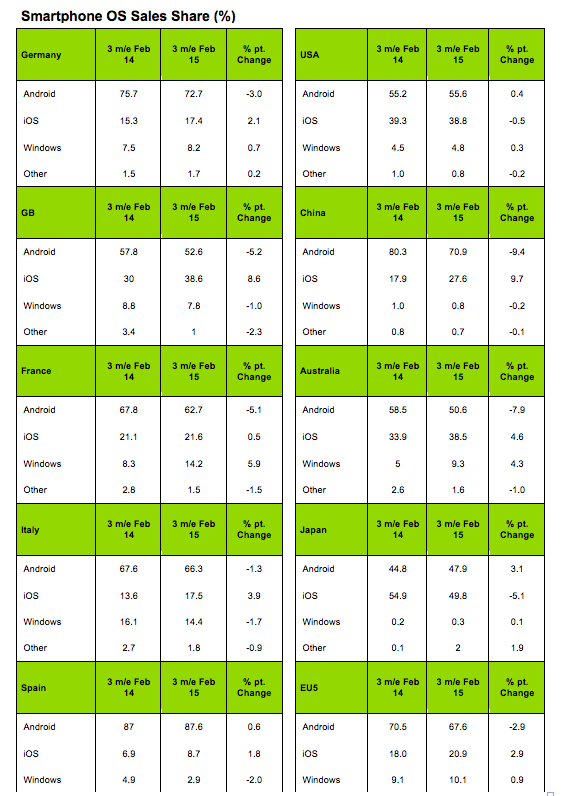 The federal government announced on Monday the removal of various COVID-19 restrictions, which includes the requirement of the ArriveCAN app upon entry into Canada. Confirming last week’s reports, Health Canada says as of October 1, 2022, all travellers, regardless of citizenship, will no longer have to: submit public health information through the ArriveCAN app or website; […]
Gary Ng
13 mins ago