If you’re looking for some iTunes cards to stock up on, check out your local Costco as right now $100 multipacks are available for $79.99. The offer also extends to Costco.ca, but it’s $5 more at $84.99 (that $5 could be the cost of saving your sanity from visiting Costco on a Saturday afternoon in Richmond, BC). 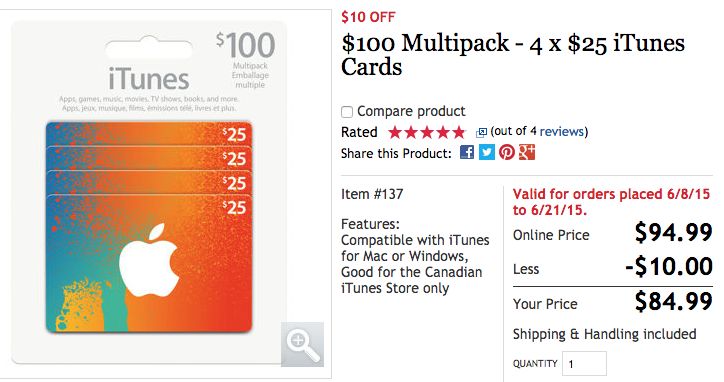 An iTunes account funded by these discounted cards equals savings on any digital purchase from Apple, even subscriptions (iCloud storage, Netflix, etc). So if you’re planning to sign up for Apple Music when it launches June 30, loading up on these cards can save you 20% off the unannounced Canadian monthly price (which most likely will be higher than the $9.99/$14.99 USD prices).

Also, since Apple raised iTunes store prices to reflect the changing Canadian dollar, these discounted iTunes cards couldn’t come at a better time and this is probably the best sale we’ve seen in a while, aside from the paltry 10% (and sometimes 15%) off. Let us know if you’re going to pick some up!