Earlier today, Apple’s Lightning to 3.5mm adapter received the teardown treatment, which revealed that it includes a small digital-to-analog converter (DAC). Now, a German website, which has run extensive tests on the audio adapter to determine whether or not there is any sound degradation, has confirmed that the iPhone 7 with 3.5mm Lightning adapter does sound worse than iPhone 6s with 3.5mm headphone jack (via BGR). 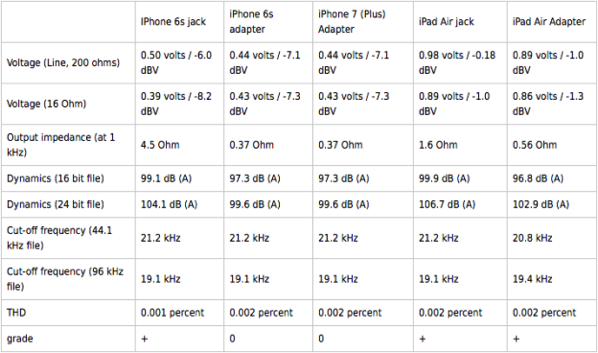 Below is a computer-generated translation quoted from the source:

However, it must be emphasized that these results aren’t too bad since the difference is going to be completely imperceptible to most people. In fact, even some audiophiles with an incredible ear for sound won’t notice the difference unless they’re listening to high-quality 24-bit audio files.

So if you mostly listen to Spotify or Apple Music on your iPhone, chances are you won’t even notice the difference.

Of course, this is just one set of tests, so don’t take them as a foregone conclusion. One unscientific test by AppleInsider claimed the new Lightning EarPods sound better than the 3.5mm headphone jack, so it’s hard to say if anything is conclusive at this point.