McDonald’s, Starbucks and Wendy’s iOS Apps are Reading Your iPhone Clipboard [u]

iOS 14 has a privacy feature that alerts users when an app has copied from your iPhone or iPad clipboard.

Earlier this month, The Weather Network admitted its app was able to read a user’s iPhone clipboard and an update would be soon coming to disable the function. The company also stated it had reached out to Apple for “best practices” moving forward.

Now, with more people using iOS 14 beta, after a recent Public Beta release, more apps have been revealed to view your device’s clipboard.

Apps verified to show the “pasted from ____” message in iOS 14 include McDonald’s Canada, Starbucks Canada and the Wendy’s iPhone app, as seen in our screenshot below: 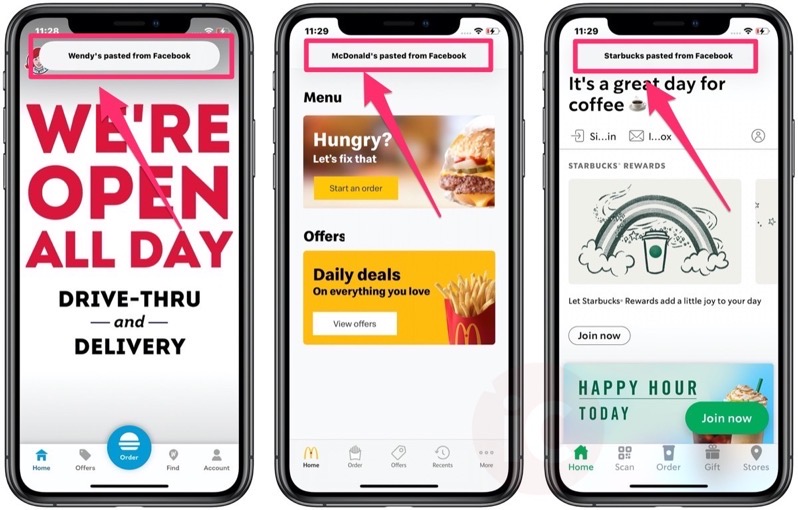 The discoveries of this privacy invasion were first unearthed by security reachers Talal Haj Bakry and Tommy Mysk back in March of this year, ahead of iOS 14 beta, which was unveiled at WWDC in June. CBC News was originally on their list of apps reading your clipboard, but a recent update stopped the behaviour.

We’ve reached out to these companies for statements on the matter. If you’re worried about your privacy and contents from your clipboard, you may want to stop using these apps. Other apps caught reading clipboard contents include Reddit and LinkedIn, with the latter recently being sued by an American user over the privacy issue.

Update: A Starbucks spokesperson told iPhone in Canada this issue will be fixed in an upcoming update, expected to be released next week.

Update July 17: A Wendy’s spokesperson responded and told iPhone in Canada, “This is a priority for Wendy’s” adding a fix is currently underway and will be released before the end of July.

Update July 17: McDonald’s Canada has now responded to say, “We are aware of the recent iOS 14 beta released by Apple. We are working to fix the issue before the iOS update is more widely available to the public.” The restaurant chain further told us in a statement, “The privacy of our guests is important to us, and that’s why we take appropriate measures to keep any personal information secure, including on our app.”

Earlier this month Twitter’s ‘Chief Twit’ Elon Musk said encrypted direct messages were coming, and now we’re seeing evidence how the company will achieve this. According to researcher Jane Manchun Wong, she said on Saturday evening, “Twitter will adopt the Signal Protocol for Encrypted DMs. Seeing code references of the Signal Protocol inside Twitter’s iOS […]
Gary Ng
4 hours ago