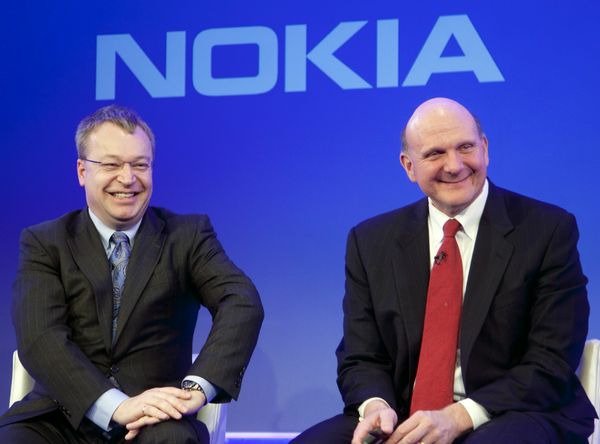 In an announcement made Monday evening, Microsoft will acquire Nokia’s devices and services business, patents and mapping services as part of a $7.2 billion deal. Microsoft CEO Steve Ballmer had this to say:

“It’s a bold step into the future – a win-win for employees, shareholders and consumers of both companies. Bringing these great teams together will accelerate Microsoft’s share and profits in phones, and strengthen the overall opportunities for both Microsoft and our partners across our entire family of devices and services,”

“In addition to their innovation and strength in phones at all price points, Nokia brings proven capability and talent in critical areas such as hardware design and engineering, supply chain and manufacturing management, and hardware sales, marketing and distribution.”

Microsoft will licence Nokia’s patent portfolio for 10 years. In addition, Nokia’s Canadian CEO and ex-Microsoft executive, Stephen Elop, will join Microsoft; the latter is seen as the next likely candidate to replace Microsoft CEO Steve Ballmer, set to retire within the next 12 months.

In a joint open letter, both CEOs describe how “Today marks a moment of reinvention.” Below is an excerpt:

Today’s agreement will accelerate the momentum of Nokia’s devices and services, bringing the world’s most innovative smartphones to more people, while continuing to connect the next billion people with Nokia’s mobile phone portfolio.

With the commitment and resources of Microsoft to take Nokia’s devices and services forward, we can now realize the full potential of the Windows ecosystem, providing the most compelling experiences for people at home, at work and everywhere in between.

We will continue to build the mobile phones you’ve come to love, while investing in the future – new phones and services that combine the best of Microsoft and the best of Nokia.

Nokia and Microsoft are committed to the next chapter.

Together, we will redefine the boundaries of mobility.

By the time the deal is closed, 32,000 Nokia employees (4,700 in Finland; 18,300 worldwide directly related to manufacturing, assembly and packaging of products) will transfer to Microsoft.

Back in February of 2011, both companies announced a partnership, with Nokia adopting Windows Phone as it primary smartphone strategy, part of a joint plan to “disrupt” other mobile ecosystems, which has not really happened. Nokia’s stock price at the time was $64.40 per share; as of writing, it’s at $3.90.

The bottom line: looks like Microsoft wants to take better control of both hardware and software when it comes to future Windows Phones and this acquisition seems to accomplish that. IDC last reported the worldwide smartphone operating system marketshare for Windows Phone was at 3.7%.

Do you think this deal will help Microsoft sell more smartphones?