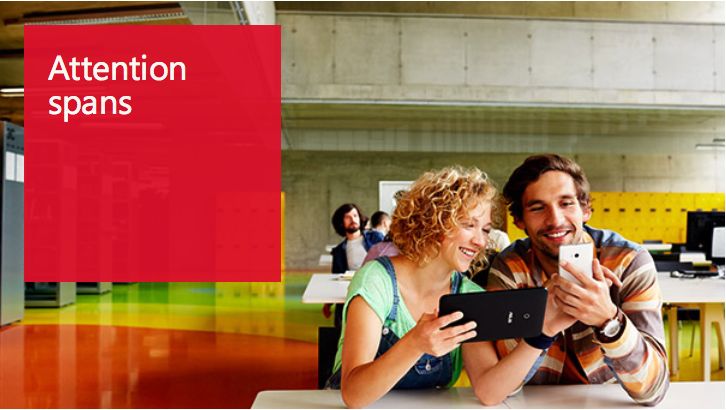 Microsoft has recently published a study suggesting that the average attention span of humans has fallen since the start of the century. The study was conducted using surveys and EEG scans.

“We are moving from a world where computing power was scarce to a place where it now is almost limitless, and where the true scarce commodity is increasingly human attention”

The research paper notes that the reduction comes from a combination of smartphone use and an abundance of content. Many people compulsively check their phones, and the variety of content on the web (such as social networks) makes it really easy to get distracted.

However, the study wasn’t all bad news. Even though tech is hurting our long-term attention spans, it also appears to be improving our ability to multitask and concentrate in short bursts. Overall, this gives us a better sense of what deserves our attention and allows us to do a better job of remembering certain things.

It seems like heavy use of social networks tends to make things a lot worse. Many studies have shown that heavy use of social networks increases our need to compare our lives to the lives of others. Even though there are limits to these improvements, you can still be assured that technology is improving our lives (you just have to use it correctly).

Any shred of mystery Google was saving for its Pixel 7 series launch event on Thursday, October 6, likely dissipated when a detailed and legit-looking spec sheet for the two phones leaked online over the weekend (via 9to5Google). Apparently, a mobile carrier in Taiwan prematurely shared the spec sheet for Google's Pixel 7 and Pixel...
Nehal Malik
32 mins ago