On Thursday, Microsoft launched Word, Excel and PowerPoint iPhone apps with the ability to create and do basic editing to documents for free, without requiring an Office 365 subscription. Today, the apps are already topping the App Store charts with Microsoft Word at number one, closely followed by other Office apps including Excel and PowerPoint (via TechCrunch). 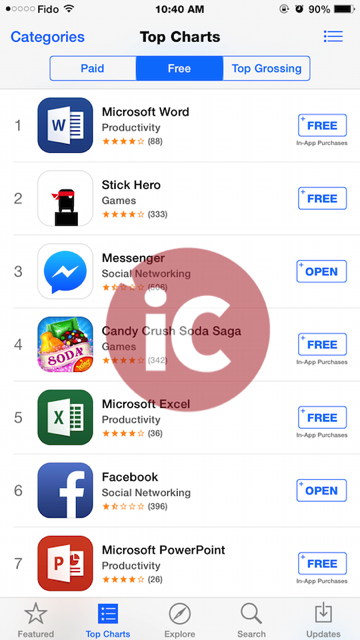 Microsoft recently announced a partnership with Dropbox to integrate the cloud storage service into Office across desktop, mobile, and the web. As a result, users can now download the new Office suite for iPhone / iPad and store all their documents on Dropbox without paying any membership fee.

The company has also made public that over 1 billion people use Office, and its Office for iPad product had been downloaded more than 40 million times. Also, there are now over 7.1 million active Office 365 Home and Personal subscribers.

If you haven’t already, you can download the Office suite of apps at the following App Store links: