Some people make a living off of making YouTube videos about software from Microsoft and other companies. 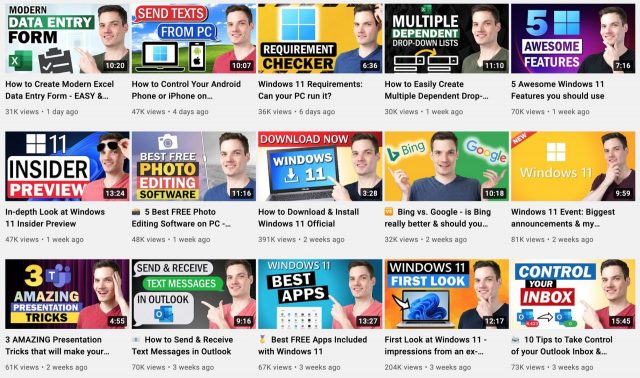 According to a new report from CNBC, former Microsoft employee Kevin Stratvert has built a formidable audience on his YouTube channel dedicated to Microsoft-related content.

Since starting the channel, Stratvert has gained 822,000 subscribers, 85 percent more than the official Microsoft 365 YouTube channel focused on Teamsn and other Office applications, which has a team of 20 to 30 people producing content.

“I’ve built a Microsoft audience,” Stratvert said. “Microsoft content drives a lot more viewership than non-Microsoft content. I’ve done Gmail and a few others, but they haven’t done quite as well.”

Through his channel, Stratvert creates content that helps viewers navigate the various difficulties and issues that exist within the Microsoft platform, including apps like Office, Teams, and more. Another YouTube channel from creator Leila Gharani, a software instructor in Vienna, also focuses on Microsoft and has over 900,000 subscribers.

Both of these creators, and many more, make a generous living from their YouTube content. Stratvert, for his part, says he has done better making videos on Microsoft than he ever did working for the company.

“It’s done extremely well,” he said. “My wife looks at that — ‘Oh, man, working at home, cranking out a video a day, maybe I should do this, too. Maybe I should pull together videos.’ Same with her sister, too.”