A well-informed Apple analyst has revealed details on the slew of new products the company may release this year, including a 16-inch MacBook Pro, a 31-inch 6K display, and new iPhones and iPads.

That’s according to reliable analyst Ming-Chi Kuo of TF Securities, who in a research note seen by 9to5Mac claims that the MacBook will feature a screen sized between 16 and 16.5 inches, which would make it the biggest Mac laptop since the 17-inch models were discontinued back in 2012.

Kuo also claims the supersized MacBook will also feature an “all-new design,” despite the fact that Apple only launched the first redesigned Touch Bar models in late 2016.

While the report offers up no further details about the alleged 16-inch MacBook, it suggests Apple will also introduce a new 13-inch MacBook Pro with support for 32GB of RAM; at present, only the 15-inch model can be configured with that amount of memory.

Apple will also re-focus on the professional market with a display that is so big it can serve as a TV: a 31.6-inch monitor with 6K resolution. This matches a claim made in 2017 by Phil Schiller, Apple’s senior vice president of worldwide marketing, that it is not leaving the pro market, with the company actively working on a display to match yet another Mac Pro redesign. 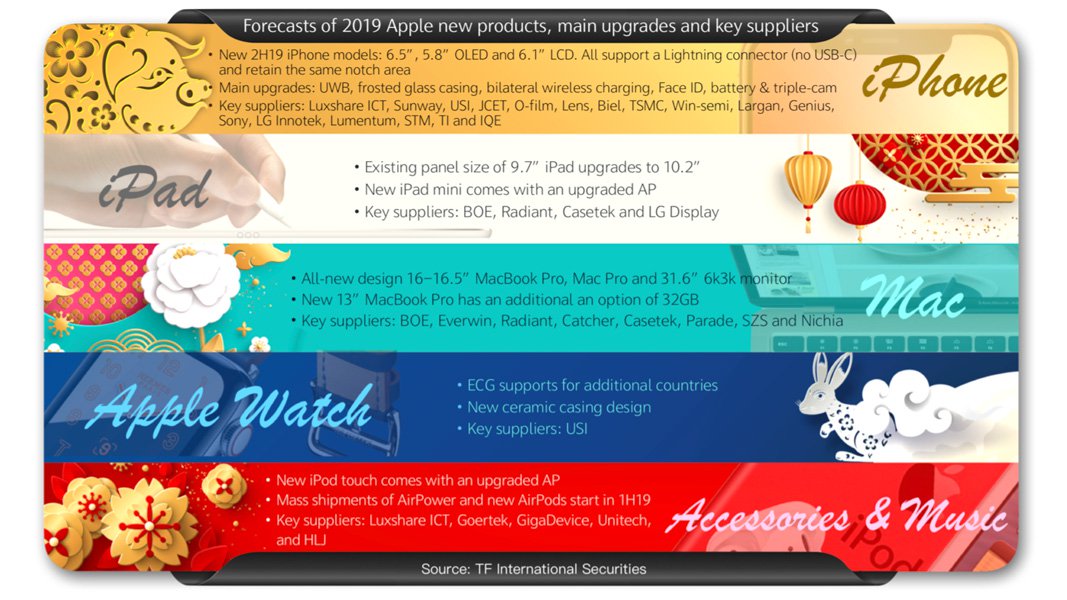 Additionally, the 2019 iPhone lineup will mirror that of the current lineup, including 6.5-inch and 5.8-inch OLED models as well as a 6.1-inch LCD model. As for changes to expect in 2019, Kuo says the iPhone XR successor may be upgraded to 4GB of RAM, while all models will include frosted glass casing, larger batteries, the ability to wirelessly charge other devices, and new technology for indoor positioning and navigation. The models will also retain their Lightning ports instead of switching to USB-C.

Kuo also says Apple will likely show off two new iPad Pro models this year, both with upgraded processors, alongside a new iPad Mini that’ll also boast souped-up internals. According to recent rumours, this model will look almost identical to the iPad Mini 4.

Finally, a new ceramic casing design for the Apple Watch will be released sometime this year, as will ECG support in more countries, Kuo added. Ceramic was dropped as an option when the Series 4 premiered last fall. This may have been because of poor sales, production issues, or simply because Apple no longer felt it was necessary.