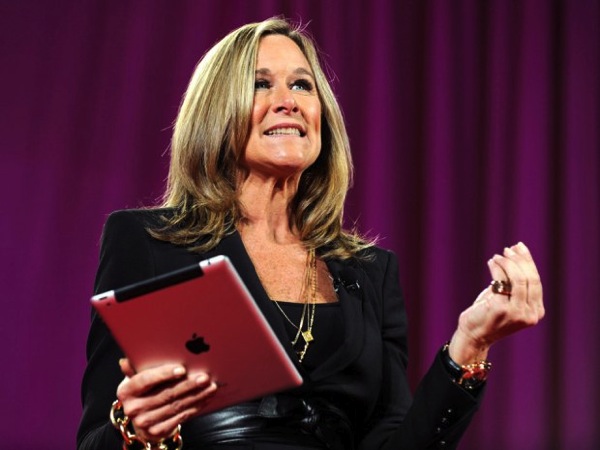 Last night Apple announced it had found a new retail chief via American Angela Ahrendts, the current CEO of Burberry who resigned from her role this morning and will take on her new role in Cupertino around mid-2014.

As this news continues to filter out, more details have emerged about Ahrendts and Apple. The Telegraph reports Burberry chairman Sir John Peace knew in advance of Ahrendts’ upcoming departure and “tried all that he could” to keep their CEO on board, as he feared the fallout would affect the company’s stock.

Sources close to the chairman however suggested that despite his overtures, Ms Ahrendts was determined to tackle the new role – she is to join the technology giant as head of retail and online – which will allow her to move her family, including three children, back to her native US.

The news of the Burberry CEO’s resignation caused the luxury retailer’s market value to decrease by £500 million ($829 million CDN).

As for her hire, the WSJ reports she had agreed to join Apple several months ago according to sources, with her retail spot “locked and loaded” by this summer, with the Cupertino company’s bid beating out more recent bids by J.C. Penney seeking out a new CEO–after former Apple retail chief Ron Johnson was fired from the retailer.

The announcement was delayed as Burberry weighed her successor, which has turned out to be the company’s creative director, Christopher Bailey.

Coincidentally enough, former Wall Street Journal reporter Jessica Lessin reports Apple’s new retail chief has a passion for watches which includes a recent launch of a high-end women’s line at Burberry. According to sources, Ahrendts took interest in the watch line-ups at Burberry, which interestingly ups the game for Apple’s rumoured iWatch:

Apple’s new retail chief Angela Ahrendts is a watch lady, say people who know her. I am certainly not implying that Apple, which is developing the iWatch, nabbed this high-profile executive because she loves watches or because one of her most recent additions to the Burberry line was a very high-end watch brand (both true).  I also hear she took particular interest in the watch retailing space in Burberry stores. Let’s just say her passion for watches is a coincidence. Or maybe just a plus. Needless to say the merchandising around the iWatch, whenever it arrives, will be remarkable.

Ahrendts’ new role at Apple may not have come as a surprise to some, as in a 2010 WSJ magazine profile she compared Burberry’s strategy to the likes of Apple instead of competitors Gucci and Chanel:

“If I look to any company as a model, it’s Apple,” she said. “They’re a brilliant design company working to create a lifestyle, and that’s the way I see us.”