Like I said, the rumours keep coming in fast and furious for the impending iPhone launch. This time around, TiPB reports the next iPhone 5, or iPhone 4S is set to launch on Friday, October 7th in the US, according to what a ‘little birdie’ told them:

Weâ€™re still hearing that an â€œiPhone 4Sâ€-style device, with improved processors and optics, is more likely than an all new design, but given the many and varied rumors, itâ€™s impossible to tell for sure. It could even be that the â€œiPhone 4Sâ€ is the budget iPhone Apple supposedly completed work on just before WWDC 2011 (the iPhone nano, so to speak), and the â€œiPhone 5â€³ is the new high-end model.

Yesterday, rumours noted the iPhone ‘4S’ production is set to start in September, with an October release. Telus is rumoured to offer the iPhone in October, too.

As for the iPhone 5, @karaswisher from AllThingsD boldly proclaimed their solid sources have all but confirmed the launch in October (and dismissed the September 7th media event rumours).

She also acted in a rude manner and told off MacRumors founder, Arnold Kim, to ‘get a life’ after he asked a simple question to clarify.Â Check out the twitter ‘drama’ below (come on, you love TMZ-style news): 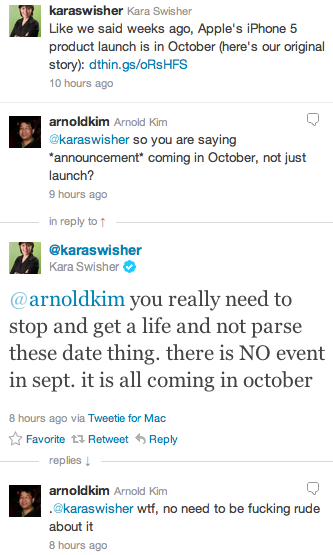 Apple is a passionate company. Their followers are even more passionate.