The Apple Maps and Google Maps saga has exploded out of control, with further news surfacing Apple ditched Google’s maps over lack of voice-guided turn-by-turn directions. Apple also was also reported to have broken contractual obligations with Google prematurely by a year, in a surprise move to launch Apple Maps with iOS 6.

Google is reportedly working on their iOS version of Maps and its delayed release is due to the ongoing plans to implement 3D mapping from Google Earth.

Today, David Pogue’s critical piece on Apple Maps in the New York Times revealed Google is set to release Street View for their web app in the next two weeks:

You can still use Google’s maps — on the Web. Visit maps.google.com and accept the offer to create a Home-screen icon for you. You won’t get spoken directions, but you’ll get written directions, public transportation details, live traffic reports and, of course, Google’s far superior maps and data. (In two weeks, you’ll be able to get Street View this way, too, says Google.) And you can install the Google Plus Local app for full access to Google’s more complete database of shops and businesses.

The web app version of Google Maps is an alternative for those looking for transit directions, absent in Apple Maps. 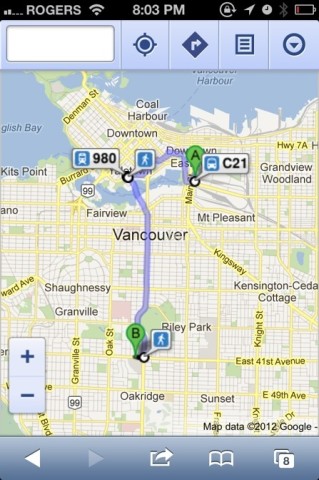 As for Google’s ‘surprise’ when Apple told them they were ditching Google Maps, John Gruber notes Apple had started acquiring mapping companies dating back to summer of 2009, and plenty more afterwards. What was Google thinking Apple had planned on doing with all of these mapping acquisitions?

Apple Maps and turn-by-turn directions work flawlessly in iOS 6. Issues users are complaining about are the random inaccuracies and lack of relevant search queries. But, not everybody is unhappy with Apple Maps–users in China are reporting an improvement in Apple’s new maps over Google’s former offering in iOS 5.

Samsung is hosting its next major Galaxy Unpacked keynote on August 10th, 2022. It is here that the company is expected to reveal a series of new products just in time for the late-summer period. The company has already been teasing what we may expect to see from the Galaxy Unpacked. In a teaser trailer,...
Steve Vegvari
49 mins ago

2022 marks the grand return of Toronto's Canadian National Exhibition (CNE) and with that comes the return of the CNE Gaming Garage. Powered by AMD, the fourth annual CNE Gaming is hosting a series of esports tournaments with over $22,000 on the line. The CNE Gaming Garage will be presenting two packed weekends full of...
Steve Vegvari
2 hours ago

Apple today released iOS 16 beta 5 and more for developers today. These new releases included some new features, such as bringing back the battery percentage to the battery icon in the status bar on iPhone. Also, for finding devices such as your iPhone from Apple Watch, there’s a new alert sound. Some other minor...
Gary Ng
14 hours ago