Turns out prank street names have made its way onto Apple Maps, at least in Afghanistan. The Wall Street Journal’s Kabul bureau chief, Yaroslav Trofimov, was using Apple Maps when he noticed streets carrying “too-good-to-be-true” names such as Bad Monkey, Mojo Way and Hilbilly Hameed. 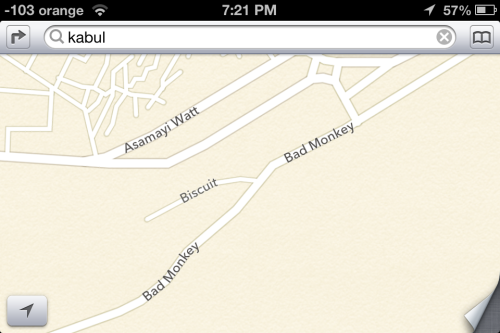 As he is familiar with Afghanistan’s capital, Trofimov was sure these names weren’t legitimate, and he tweeted with the hashtag. #TooGoodToBeTrue.

How could this happen?

As the UN Dispatch reports, Apple copied old open-source maps of Afghanistan’s cities in their entirety from OpenStreetMaps.

Apple had copied old open source maps of Afghanistan’s cities in their entirety from OpenStreetMap (OSM), the site sometimes described as the “Wikipedia of maps,” without checking the veracity of the information they contained. Essentially, it had lifted the earliest rough drafts of the maps.
The old maps were created by a small group of Afghan university students and mapping enthusiasts who assigned prankish fake names to streets that lacked official names or were subjects of naming disputes due to decades of overlapping conflicts. Eventually, these digital cartographers replaced most of the fake street names with the names most commonly used by locals, or simply removed them and left the streets nameless.
“The issue is that Apple took an old snapshot of the OpenStreetMap data and hasn’t updated it since, so things like ‘personal’ street names are in there, even if they have been fixed since,” explained Kate Chapman, Indonesia-based director of the Humanitarian OpenStreetMap Team, OSM’s humanitarian mapping initiative. “The fact that they don’t update the data shows that the incentive for people to improve the map just isn’t going to be there.” 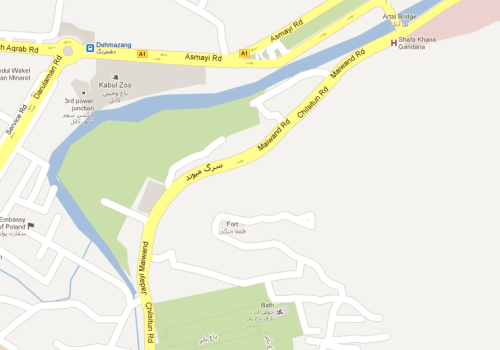 After verifying the prank street names, I found they are still there. When compared to Google Maps, the “Bad Monkey'” street’s name seems to be “Maiwand Road”.
Have you noticed similar issues in your area?

An Apple AirTag proved instrumental in the arrest of a U.S. airline worker in connection with a series of luggage thefts — reports Insider. Apple launched the AirTag for $29 USD ($39 CAD) last year to help customers keep track of their belongings (and more). AirTags harness the Find My network, which comprises over one...
Nehal Malik
3 hours ago