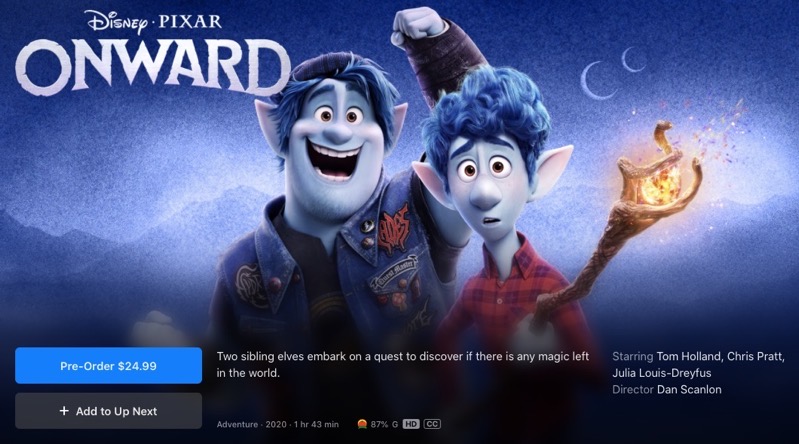 Update March 20, 7:31PM PDT: Looks like Onward isn’t coming to Canada until March 22, according to a date now added to its iTunes listing. The March 20 launch appears to be U.S. only.

Pixar’s latest film, ‘Onward’, only hit movie theatres on March 6, but now it’s seeing an early release on digital, as well and Disney+ in the U.S.

Walt Disney Studios announced this morning Disney and Pixar’s “Onward” will be available to buy digitally on platforms such as iTunes and Movies Anywhere, beginning at 5PM PDT/8PM EDT. For Disney+ subscribers in the U.S., they’ll see the movie land on April 3, 2020.

“With cinemas currently impacted by closures due to the global health crisis, Disney will offer the film ahead of schedule to purchase on digital platforms,” said Disney+ in an email iPhone in Canada.

“While we’re looking forward to audiences enjoying our films on the big screen again soon, given the current circumstances, we are pleased to release this fun, adventurous film to digital platforms early for audiences to enjoy from the comfort of their homes,” said Dan Scanlon (Director, “Onward”) and Kori Rae (Producer, “Onward”), in a statement.

Currently, iTunes is showing ‘Onward’ as available for pre-order at the price of $24.99 in Canada.

We’ve reached out to Disney for clarification on when ‘Onward’ will come to Disney+ Canada. If we look at how quickly Frozen II was released on Disney+ in the U.S., then days later for Canada, ‘Onward’ should make its way here sooner than expected.