Backed by nearly $2 billion USD in investment funding, mobile-only streaming platform Quibi made its official debut in Canada yesterday and according to Sensor Tower, the app has already surpassed 300,000 downloads in the service’s launch markets of the United States and Canada. 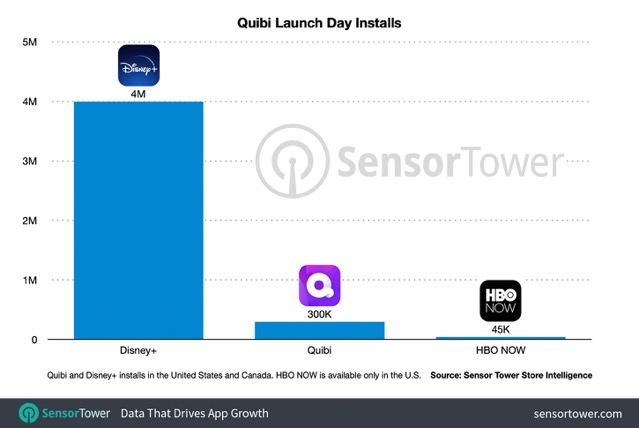 In comparison to Disney+ though, Quibi’s downloads are quite small as the former saw over 4 million mobile downloads in the U.S. and Canada when it launched in November last year. HBO NOW, however, was installed only 45,000 times at its launch, five days ahead of the Game of Thrones season five premiere.

Quibi’s release figures were bolstered by a lengthy pre-order period, effectively front-loading a significant number of downloads into its launch day.

The launch of Quibi comes at a time when everyone is glued to streaming services amid the COVID-19 pandemic lockdown. Early reviews in iTunes have been fairly positive, with Quibi seeing an average rating of 4.6 stars out of 5 in the Canadian App Store.