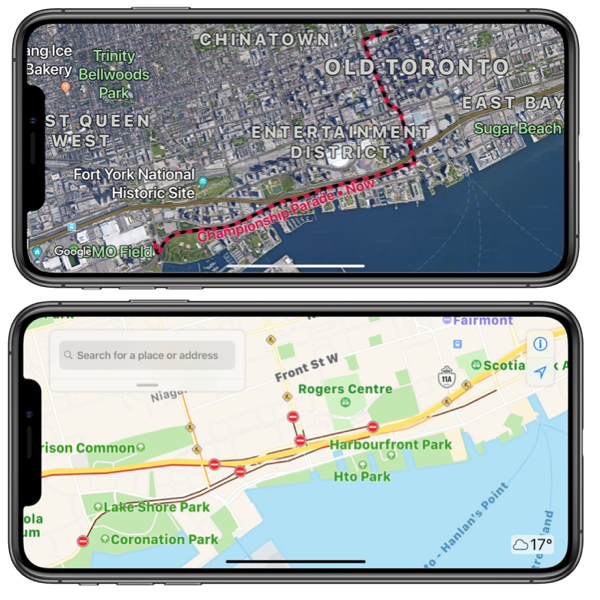 The Toronto Raptors NBA Championship Parade celebration has been underway for hours, with millions of fans lining the streets of downtown Toronto the celebrate the team’s historic playoff run.

If you’ve been unaware of the NBA Championship Parade today, there’s a stark difference when it comes to Google Maps and Apple Maps on iOS.

Looking at our image above, Google Maps shows the Raptors “Championship Parade” route, denoted by a path of directional black and red arrows, while also noting “Now” to inform people the celebrations are underway. Non-Raptors fans and other travellers would immediately realize to avoid the downtown core.

With Apple Maps, there is no mention of the Raptors Championship Parade route, but streets are noted as closed. Apple Maps in iOS 13 beta also does not indicate a parade is underway or the route.

Apple Maps is set to gain improvements, with a new Look Around feature similar to Google Street View. Currently, Apple Maps cars can be seen ‘driving across Canada’, recording imagery and landmarks for the updated mapping application coming in iOS 13.

When it comes to real-time events, Google Maps still has an advantage over Apple Maps, and the image above shows the differences, in this case.