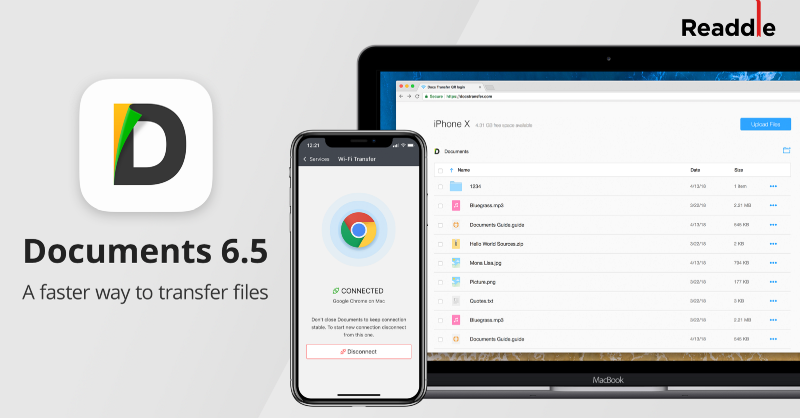 Documents, created by Readdle, has been on the app store for quite some time, filled the gap with features that made it indispensable for accessing files on iOS devices until Apple released its Files app. Documents, however, still stays relevant through a number of convenient tools.

According to a Medium post from Readdle, the WiFi Transfer system is easy to use and more flexible than Apple’s AirDrop, making it something to keep in mind, especially when you are moving large numbers of files between a Mac and iOS device.

The new feature is located within the Services tab in the Documents app. Tapping this option opens a camera view containing instructions to open docstransfer.com on one’s computer, which brings up a QR code. Scan that code with the app, and Documents creates a local WiFi connecting between one’s computer and iOS device.

Once connected, you’ll see all the files you have stored in Documents in a tab of your browser. Users can then drag and drop in files to add them to their iOS devices, or select files and download them to their computer. Using Chrome, users can also drag entire folders to a computer or iOS device with Documents.

The feature is quite fast in its own network and is still a great alternative to data exchange via iTunes or AirDrop. Additionally, Documents works not only with a Mac, but with PCs as well. Keep in minds that Documents must be open during file transfer, otherwise the connection will be cut off after 10 seconds.

The Documents update is available on the App Store as a free download.