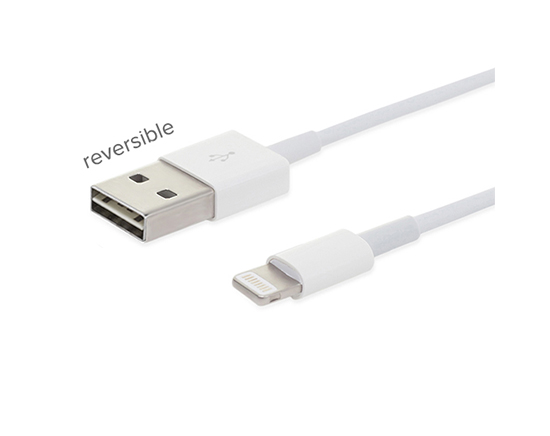 Now, online retailer Moca claims it has the inside scoop on the new cable, which won’t be released with the iPhone 6. However, despite this supposed setback, the company says it is taking pre-orders for MFi-certified reversible USB Lightning cables for those interested (what are the odds!):

We are informed by the Official Manufacturer of Apple that the new Reversible USB Cable will not be released together with upcoming iPhone 6. Apple fans will not be able to get the MFi version of this revolutionary cable from Apple this year but that is not the end of the story.

We love the new design and we believe many Apple Fans out there feel the same. We have already spoken with the manufacturer and we are Officially Licensed with the Patent of the reversible USB design. We are now ready to start production anytime and we are now accepting Pre-Orders on the new MFi Certified Reversible USB Lightning Cable. The Cable will be produced by the official manufacturer of Apple and MFi Certified by Apple.

Moca told MacRumors despite the apparent setback on the reversible USB Lightning cable, the rumoured redesigned high-powered USB adapter is said to already be in mass production, according to their sources.

A newer power adapter to fit the higher energy requirements of a larger iPhone 6 sounds like a must-have. As for a reversible USB Lightning cable, that would be the icing on the cake.

There’s just over two weeks to go before Apple is expected to announce new iPhone 6 models at a media event.