Scotiabank launched support for Apple Pay back in May, alongside TD and BMO, following closely behind RBC and CIBC. 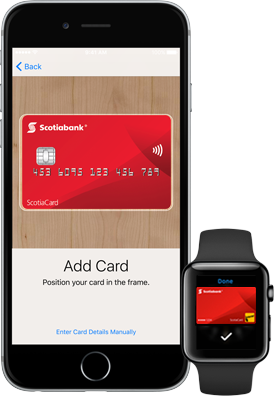 The financial institution has since launched an Apple Pay promo to get customers enticed to setting up their debit and credit cards on their iPhones and Apple Watches, offering them 10% cash back on everyday purchases—up to $20 max—and available only to the first 50,000 customers.

An email to bank customers explains the promotion (via RFD):

Add your eligible Scotiabank debit and credit cards to Apple Pay, and get 10% cash back on your everyday purchases – up to a maximum of $20 – on the first card you use! This offer is available to our first 50,000 customers who make Apple Pay purchases.

Cash Back bonuses will be credited to accounts in December 2016, as long as your account remains open and is in good standing. Scotiabank says they may cancel or change the offer at anytime, without notifying customers.

Let us know if you received this email from Scotiabank, and if you’re already on your way earning some cash back with Apple Pay.

Meanwhile, in the UK and US, Apple retail stores are offering customers $5 in iTunes credits if they setup Apple Pay on the spot. No word if this promo from Apple will come to Canada or not.

Following Morgan Stanley's estimate that Apple’s App store net revenue tumbled a record 5% last month, CNBC's Jim Cramer has said that investors should ignore negative calls about the iPhone maker and hold onto their shares. “The next time you hear this Apple mishegoss, you need to recognize that you’re still getting one more buying opportunity in...
Usman Qureshi
33 mins ago