Servus Credit Union Working on Getting Apple Pay for Its Members

Yesterday, credit union Coast Capital Savings launched Apple Pay for debit and credit cards, adding to yet another expansion of Canadian support for the iPhone and iPad’s mobile wallet.

Despite some credit unions offering their own Mobile Pay solution, others appear ready to support Apple Pay instead, such as Coast Capital. Now, it appears Servus Credit Union is apparently ready to get on board soon, as a response to a customer on Twitter says “we are working on it as we speak!”: 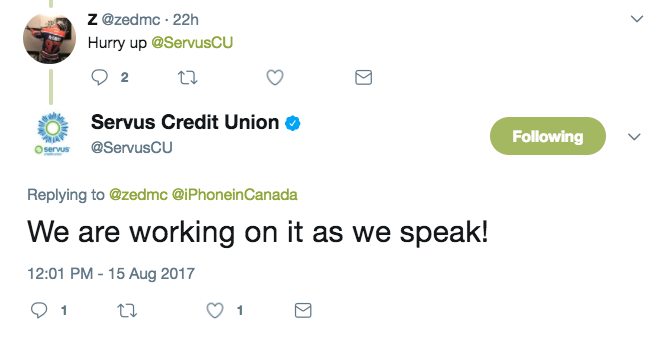 The customer had replied to our story about Coast Capital Savings launching Apple Pay, and wanted to tell Servus to “Hurry up”.

Servus Credit Union has over 100 locations in Alberta, serving 59 communities. Stay tuned as we’ll be tracking this for future updates.