Skype today is celebrating 10 years of video calling and says the future is coming soon “in the coming weeks” for iOS, Android and Window 10 Mobile users: group video calling. 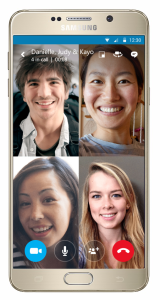 In a decade, Skype users have made nearly two trillion minutes of video calls. Here’s a video they made below to celebrate this milestone:

The free group video calling feature will be rolling out to their hundreds of millions of mobile users soon, and Skype says you can pre-register for it here.