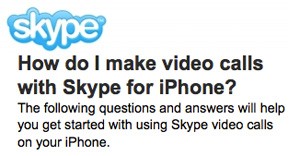 We all love Skype–when it’s not down. The latest rumour coming from Engadget is that Skype video chat will be coming to the iPhone, with the big announcement coming at CES in 2011.

Skype has been telling everyone that it’ll be making a “series of video-related announcements” at CES next month… and it’s participating in a panel called “Video Calling Gets Ready for Primetime,” so yeah, needless to say, we’d have to guess that Skype’s finally getting ready to enter the mobile video calling game in a big way. Anyhow, the final piece in the puzzle filtered into our inbox this morning: a help document on Skype’s site detailing making video calls using Skype for iPhone

The update is that the document has “disappeared”. Someone at Skype made a boo boo!

Video calling via Skype on the iPhone 4 is inevitable. It’s actually been overdue when you think about it. Skype likes to make us wait for things. The iPhone app took a while to be released and 3G calling seemed like it only was released yesterday.

What do you think? FaceTime integration with Skype in 2011?