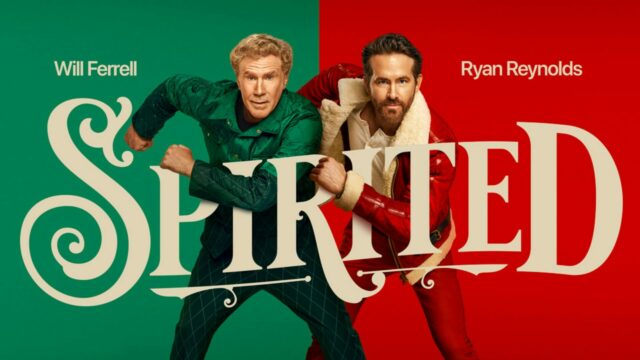 Spirited, a holiday-themed musical comedy starring Will Ferrell and Canadian Ryan Reynolds, is now available to stream on Apple TV+. The film is a retelling of the classic story of A Christmas Carol.

Starting today, Apple TV+ subscribers can tune in and watch Spirited. Adapted from Charles Dickens’ 1843 novel, Spirited retells the story of A Christmas Carol, though from the perspective of The Ghost of Christmas Present.

On Christmas Eve, the Ghost of Christmas Present (Ferrell) chooses a “dark soul” to reform and lift their spirits. However, this year, Present chooses Clint Briggs (Reynolds), a modern Ebenezer Scrooge. Briggs confronts Present until the ghost is pressured to confront his own past, present, and future.

Spirited also has a supporting cast featuring Octavia Spencer, Tracy Morgan, Sunita Mani, and Patrick Page. The film is directed by Sean Anders, who has worked on Horrible Bosses, Daddy’s home, and Daddy’s Home 2. Anders also serves as writer alongside John Morris. Anders, Morris, and Ferrell are all credited as producers on the project as well.

Upon the announcement of the film, Apple found itself in a bidding war for the film. With news that Anders, Morris, Ferrell, and Reynolds were attached, Apple paid over $60 million USD for the rights to the film. Prior to its launch on Apple’s streaming service, Spirited had a very limited theatrical release. Currently, it is sitting at 67 percent on Rotten Tomatoes, with an Audience Score of 100 percent.