Research firm Gartner voiced its projection that the traditional PC market — laptops, desktops — will shrink by 6.7% this year thanks to the post-PC devices available on the market. How does this change the habits of CEOs? Well, for example, they can get rid of their desktop computer and transform any place into an office with some help from tablets and smartphones (via the Wall Street Journal).

Starwood Hotels & Resorts Worldwide Inc. CEO Frits van Paaschen is part of this revolution. He decided to go all mobile using only an iPad and an iPhone for work at home and at the office. 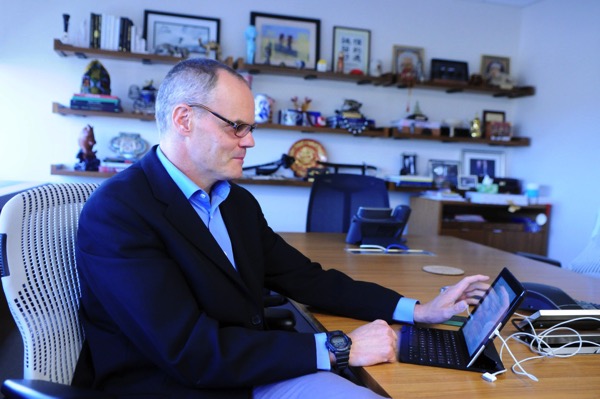 At Starwood, Mr. van Paasschen’s office doesn’t have a real desk, or the tangle of wires that comes with a typical PC setup. Instead, the room sports a couch and a conference-style table with some built-in power outlets. His real office might as well be the black bag he carries with him, which contains his iPad, keyboard and a large plastic container for chargers.

Although the transition was easier than it would be for an average employee, his case reveals how the iPad and iPhone (aka: tablets and smartphones) can change the way CEOs and employees can be productive without a desktop computer, simply by using the right apps.

For example, Paaschen starts his day with a TED talk, then reads the “paper” using apps like Zite or Flipboard. He then uses Google Hangouts or FaceTime to conduct performance reviews.

As the company moves toward mobile, apps at Starwood have become more than standard productivity tools and now include core enterprise apps built in for mobile use. By going mobile, the company has increased productivity, the CEO says: no more lengthy emails and bulky spreadsheets.

Although mobile isn’t a “magic bullet yet,” there are certainly some areas where it fits perfectly. The Starwood example shows how a device like the iPad — which was said to be only good for consumption — can be used to run a business.