Steve Ballmer had the chance to talk about everything Microsoft yesterday evening during an interview with LinkedIn co-founder Reid Hoffman. While he praised their work, he took the opportunity to open fire on his competitors, iOS and Android. 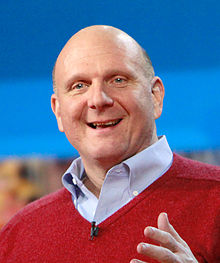 As TechCrunch reported, when talking about Android and iOS, Ballmer let out a few “bonzo” words when analyzing them from Microsoft’s perspective. He called the Android ecosystem “wild and uncontrolled” and susceptible to malware. Fact is, certain mobile security reports support Ballmer’s position.

Also, Ballmer called the Apple ecosystem “high-priced” and “highly controlled,” highlighting that international iPhone buyers need to shell out up to $1,000. That’s another weak argument though.

By comparison, he believes Microsoft’s recently released products can gain traction among consumers with diversity and organization. He says the company is working very closely with developers — omitting the simple fact that they paid developers to increase the number of mobile apps available in the Windows Phone Marketplace to 100,000 — unlike Apple and Google, who seem to have forgotten about developers. Well, at least from Ballmer’s perspective.

When it comes to talking about the enterprise market, Ballmer seems to be on firm ground, but the consumer market isn’t his field. And the recently released Gartner report just highlights this fact: Microsoft hardly reached 2.4% of market share, compared to its competitors. Yet, this is subject to change, as the latest hype around Apple’s design skeuomorphism hints that designers are attracted by Microsoft’s new design choices.